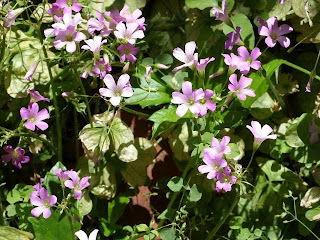 Perhaps I should have had a bowl of Lucky Charms that morning that I took this picture.  This would be what passes for weeds in my garden, shamrocks.

The next day I came through and cut them all down to bare soil with the strimmer.  (Yes, Strimmer, Ken)  ;-)

The odd thing is that I know they will be back.  I have a yard full of these things, three leaved clovers, from hedge to shining hedge.   If I let my grass grow a wee bit too tall, I get the most interesting weeds pushing up through the turf.  I used to live with someone who decided it would be a good thing to have shamrocks in the garden so we went out and got some seeds specifically to plant them out there.   It felt like a good idea at the time and I suspect that this being May, there are still great great great grandchildren of those original plants growing somewhere in Pennsylvania.  They're just not all that common up North with clover being something you don't walk on because you'll step on bees.

Here I have a yard, now mowed down, where the Shamrocks are coming back up through the turf and adding fertilizer to the soil.  If they get in the way I'll just get the strimmer back out and have a bit of destructive fun yet again, but they are pretty in their own way.

I had a visit with a farmer outside of Indianapolis once and he spoke of this sort of thing in his crops.  They called it involuntary plantings, where some of last year's crops would pop up in the middle of this year's crops.  What was last year's money maker is this year's weeds.  I thought that an odd concept since I never have a lot of luck planting things that I can actually eat but I would guess if your crop turns out to have a significant amount of "chaff" in it you will get a lower price at market.

Since I am not growing a crop in the yard, save my little strawberry in the pot or the citrus likewise, I don't have to worry about the little shamrocks under my hedge.   I'll just mow it all down when it gets unruly and start over.

At least we don't have to worry about Hedgehogs here in Florida!
Posted by Bill at 8:00 AM