How can you swim in a dry pool?

I am taking it easy on one of my faithful readers.   She likes my food postings and I didn't want to tease her with talk of a Cherry Pie... Once I get to GFS and get some Cream to Churn some Butter... Watch out!  :) 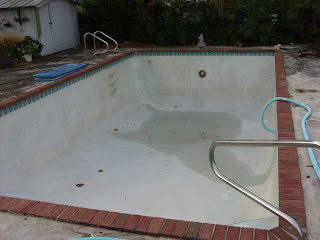 We have finally decided that enough was enough.  The pool has got to be fixed.

The thing had developed a slow leak a while back and we didn't know why.   One day the pool was very low, down about a solid six inches, to the bottom of the tiles that you can see in the detail.  We knew something was wrong and went out to take a closer look and discovered that we had a number of cracks in the walls of the pool.

Very uncomfortable feeling, and as it wasn't the right time financially we decided that we had to let things roll for a while and see what was going to happen.   The walls looked sturdy enough and there wasn't any expansion of the cracks or new ones appearing so we left things go as it was. 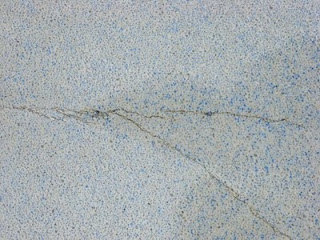 Things got better when I got my job as an IT Manager, and we started the plan to get the repairs going.   I had lost that job and now we're a month later.   The cracks hadn't magically disappeared and we simply had to have it fixed.

I was concerned that the constant water pressure on the cracks was forcing too much water into the soil underneath the pool and undermining the whole structure.   When we drained it I was scared the whole thing would just crumble like a house of cards.

This picture is the detail of one of the worst cracks.   What had happened was the water flowing into the cracks would pick up dust and soil from the pool and suck it into the crack.   We actually got to the point where the water loss daily was negligible.

When the pool was drained, there was a small fountain on the deepest crack on the right side of the pool.   It was a gusher of clear water that went up into the air about 2 or 3 inches and was refilling the pool while I was emptying it.

Overnight the pool had stopped refilling since the sand on the other side of the wall plugged up the cracks from the back.   Scary to me since the soil here is basically beach sand.

All this moving around should not be a surprise since as a child, my sister and I would go to the Jersey Shore with Dad and sometimes Mom and we would build sand castles.  I took to building moats that were deep enough to hit the water table and needed to be drained.   Some of them got quite complex and at high tide the flow could be significant from just a little bit of water. 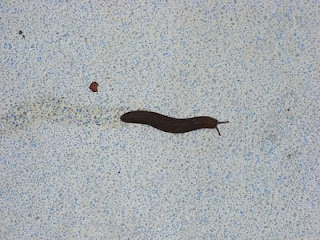 When I woke up this morning I was concerned that I might find a large animal in the pool.   I've seen raccoons use it as a washing station.  I've seen opossums on the other side of the glass when I was at my desk, which was to say the least unsettling.

This slug was all I found of all the possibilities of the critters I could have seen in there.  If you look at the first picture, this slug was in the middle of the dry area of the pool, and shows as a small dot in the middle of the bottom of the first picture.  I'd say that slug went a good 20 to 30 feet from the walls, and there's an apron of cement around it that is a good 10 feet wide on either side.   Either a bird dropped an early meal or it had a long walk!

So today I get to watch a crew come in and "staple the crack together then patch it".   The pool won't look nice, but it will hold it together until we can get it patched and repaired completely.  I won't get much else done other than babysitting that crew, but then again, did I really expect to?
Posted by Bill at 8:00 AM