Lettie is Watching The Door 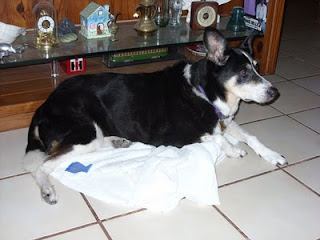 When you have a dog this beautiful you just want to show her off.

She's doing fine, although I was afraid this time last week that I had lost her.  I was worried whether I'd have to take her for that Last Vet Trip and wasn't sure if she'd pull through.

One evening last week I heard her howl.   Some dogs will bark or howl at the moon.  Other dogs will bark if the neighbor rolls over in bed even if that bed is a quarter mile away.  Not Lettie.  She hardly ever barks, in fact she has always been a quiet dog.

Lady of a few words needless to say had quite a few to say that night.  She let loose a sound like a dog in pain.  Howling she came into the bedroom and saw me.  Being mostly asleep and on auto pilot, I comforted her and thought little of it after taking her outside in case she needed to "go".   She wandered around a bit and came back in.  I thought nothing more of it and went back to bed.

That morning, I awoke to a very different dog.   She was having trouble walking.  She was unstable sitting down.  She was definitely off her food, and that in itself is cause for concern.  I did manage to get her outside for a walk of significant distance, around 3/4 mile, and got her home but I was noticing she was wobbling around and stumbling.

When the Vet was open we all agreed that she go in for a visit, so I gathered her up in the meantime and got her into the Jeep.  When I said to her "Lettie lets go for a ride" instead of her acting insane and jumpy and running toward the door, I actually had to help her to her feet.  By this point, she was unable to remain standing and plopped down on the mat in the living room.   I scooped her up and put her in the Jeep and took her to Family Pet on Federal Highway in Ft Lauderdale and visited Drs Glass and Gonzales.

I tried to get her to walk to the door on her own and it was immediate, she merely toppled over.  Having a dog who has saved you, like mine has, you will make some heroic efforts to save her.  In my case I was only able to scoop her up into my arms and bring her into the office.   The ladies behind the desk knew that I needed her to get immediate attention as I buried my face into her neck sobbing.   Yes, all 6'4" and 225 pounds sobbing like a child.  I didn't care, get my girl well!

The doctors remembered her as being "Feisty" and knew she was not a well dog.  After starting her in an IV Drip of Saline and some other medications that I didn't quite get, I agreed that the best thing I could do is to take my emotional self home and let them do their job.

Luckily they knew what they were doing.

By that dinner hour, I was able to take her home.  She was still unable to walk for long distances and reminded me of a drunk on a bender.  Yes, she could stand, but not for long.  One step and the feet could go out in any direction.  It was clear that she was not a well dog.

With pills in hand, I cared for her and hoped she'd be well the next day.  The doctors were being guarded about the prognosis but thought she'd be best if she was at home with me.  So I pumped her full of Glucosamine, Pain Killers, and Muscle Relaxants, and hoped for a recovery that would allow me to have her back with some such level of "normal function".

We don't know if she had a stroke, but they did find a vertebra that was "out of alignment".  After some massage and two days of Accupuncture, she had managed to make a startling recovery.  By the weekend she was able to walk, and drag me along the normal routes even if she would fall frequently.   The first walk was with me holding onto the leash and harness and support her weight as much as possible.   The second was less so but she was still wobbling and falling.

By that weekend she was walking so that the only people who could tell that she was not completely well were me and a few close friends.   Dragging her right feet on the ground was a sign that there was something wrong with the wiring.  Even if it did save on a pedicure, you don't want your dog to do that forever.

Now that the weekend is through and I'm about a week on, she is almost normal.   The feet are not dragging, and as a result of that dragging, her walk is quieter due to the filed nails courtesy of Wilton Drive, NE 7th Ave, and some of the surrounding sidewalks.  She's almost able to sit upright on my tiles and have her feet stay put instead of immediately starting to splay to the sides.  I hardly notice any "dancing" of the back feet where she resembled a drunken square dancer.   She's back almost completely to her normal fast pace and graceful step that she's always had.

I can't say I am completely clear what happened.  After a week of watching her fight back to normal function, or almost normal function, I'm hard pressed to see anything wrong.  Even in the heat we have been getting lately she's demanding long walks of a mile or more.   That is a lot if you're wearing a black fur coat and it is 88 degrees F out there.  It's not something I want to go through again but if she had it happen once, she could have it happen again.

I guess this is a way to get it back out to the family and friends who were so supportive.  Doing Physical Therapy is something I have had to do for myself.   Having to do it for the dog is something I wouldn't hesitate to do although some may question me.

Now she's sitting on her mat, watching me type and hoping that I'll give her that cookie that is stuck inside the peanut butter jar but that is a story for a different blog posting.
Posted by Bill at 8:00 AM