Friendly Wildlife or how a Nature Park has Results

Sometimes walking around the neighborhood is like being in a Disney Movie.

Yesterday I got up early and knew it would be a strange day when I got to the corner and a bat flew by.

Not only did the bat fly by once but twice.  I guess at the end of its day, it wanted to know why this moose was walking his dog before six in the morning.   I'm not sure why since bats are not terribly common here.   I've only ever seen two before and one of those was years ago in the porch of my house in Philadelphia.

Later after finishing my morning rituals and lunch I decided I had seen quite enough of these four walls.   I have a great view of some Screw Palms of various colour and there's a large shade tree accompanied by some tall Palms across the street but that wasn't quite enough for me.   I walked out the door, up to the drive and decided to hit the thrift stores.

It was the peak of the afternoon, 2 PM, the sun was so bright as to cause the place to look surreal in a riot of intense colour that it hardly made sense.   Normally the birds are roosting in the trees and wilting in the heat like the locals at that time of day but there was one moderate sized flock of parrots that flew by and landed in the parking lot.  Parrots here are about as common as sparrows are back in Jersey, they are always nearby and you can hear them almost every time you go out your door.  This particular flock of a few mated pairs landed and watched the goings on for a while before getting bored to go on to find another place to land.

On the way back from the thrift stores, in front of The Gables on Wilton Drive I got to see the results of M.E. DePalma Park.  I started getting buzzed by butterflies.   There was a small group of them following me along like I was in that Disney Movie I was talking about earlier.  I noticed something on my left shoulder and realized that I had picked up a hitchiker.  I had a Monarch Butterfly sitting on my shoulder taking a rest.  The little critter was flapping its wings and breathing and I was too surprised to consider how unlikely it was until now.  By the time I reached the Shoppes, the Butterfly went in search of some Mexican Petunias to munch and I went on my way on home alone.

I swear all I needed was Bambi and Thumper and some orchestral music in the background and I'd be cited for copyright infringement.

This morning it started again.  I let myself sleep in until all of six in the morning... or rather Mrs Dog allowed it, and I set out the door.   Today was the day of birds.

By the time I reached the midpoint of the walk, that flock of parrots was back behind Hagen Park.   There was one in particular that seemed to take an interest in my dog and I because it flew to the fence behind the conference room there.   The rest of the flock was not happy with it doing that because you could hear them yelling to that one as if to say "Get Back Here, he's Scary!".  Needless to say, I ended up having a conversation with a green bird with a red patch over its nose for a couple minutes.  It wasn't completely one sided.  That bird seemed happy to chatter at me as long as I stood there.

Mrs Dog decided that she liked my chattering to strange birds as much as she likes me talking to my own parrot, Oscar, so she towed me along to the Drive to head back home.

The day of wildlife was not yet at an end.   I got across the street from the little Veteran's Park and there was a small flock of Sparrows that were in the tree near the corner and stop light there.   Most of them had decided that I was coming this way and that was a bad thing.   There was one particular male that thought that he was far enough away that he could leave any time he wanted so he chattered at me.   Wild Birds will sing, but it is usually not so much of a sing as a territorial warning.   I suspect the little guy was trying to tell me to leave his tree so he could have at it.   Every time he whistled, I did a poor imitation back. When he'd hear that he'd cock his head as if to say "You have a lousy accent but lets try again".  Then he'd get a little closer. 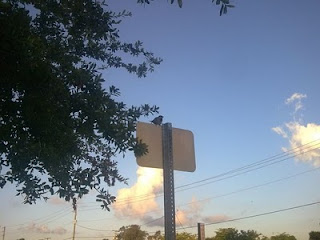 By the time we were through with all this singing and chattering, he was within two feet of my head.

I finally broke this little wildlife encounter up.   It reminded me of the sparrows in Provincetown, MA that would hang out near the little mall they have there.   They'd get fed by the passer's by when they'd land at their feet and chatter.   I fed them myself most lunches when I'd have some chinese food on fried rice while they almost ate out of your hand.

The day's still young, I could have another encounter.   I know the monarchs like my back yard and I watch them flutter past the front window all day.
Posted by Bill at 9:54 AM