Even a Small Storm Does Some Damage

Oh sure, an 80 mph Hurricane Sandy could have ruined our day.  It could have shifted the 120 miles westward and put itself right over top of the cities of South Florida.

It was a rain event.   Some winds.  Feeder bands here or there.

But past that it didn't wake me up in the middle of the night.

It was a late season weak hurricane that hit right at the same week as Hurricane Wilma had 7 or so years before it.  That was another "weak" Hurricane that parked itself over top of Fort Lauderdale for three solid days or so and caused a lot of damage.

So basically they all should be watched. 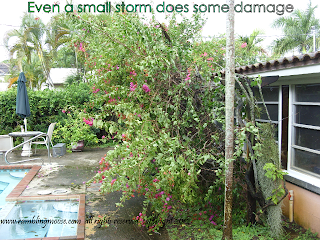 I didn't spot any damage to the house until well after I got back from the dog walk.  The sun had to come up and show me what happened to my Bougainvillea.

This picture is of the trellis behind the house.  The Bougainvillea was picked up like a giant blanket during the night and pulled forward off the trellis and the roof.  A few limbs broke, but the plant will survive.

Yep, could have been worse.  But it wasn't.  The plants here evolved to take it, and there's a reason why when you move here you want a 1 floor Old Florida home.  Those taller Mc Mansions will take the brunt for you and act like windbreaks, especially when they're built shoddily like the ones a block away from me.

Oh well, I guess we get to be landscapers this weekend.   I'll chill some drinks and have fun outside in the yard.