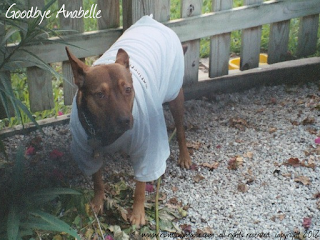 Sometime today, probably right about the time this posting goes live, Anabelle is taking her last trip to the vet.

I met her shortly after she adopted Larry and Kathie.  She was wandering around a parking lot as a stray in West Palm Beach and made it known to Larry and Kathie that she was willing to be found.

They adopted her and made an effort to find the prior owner, but that never really happened.  It was clear that she had had a rough life before then and she had a much better life in store.

One of my trips down as a snowbird, she decided that she was going to meet me.  I visited them at their house and sat on the couch after being sniffed, wiggled at, licked and generally had attention demanded of.   I practiced the "No Touch, No Talk, No Eye Contact" mantra as long as I could, and finally gave in to some good natured doggie fun.  From that point on, we made friends.  In fact, Kathie had told me more than once that she treats me in a very different way than she does anyone else.   I guess I really am a Dog Person.

Yes, this was a pit bull.  In fact she was a great ambassador for the breed, and taught me I needed to relax around them and read the owner first.  She was so sweet a dog that every time she saw me, she wanted to come with me when I went.  I guess she liked the excitement of the possibility of a ride in the Jeep that vaguely smelled like my own dog Lettie.

It is now at least 10 years later.   She's got a football sized tumor on her liver that had sucked the life out of her and left her looking thin.  They're at the point where keeping her going is just prolonging the pain.  I know that the next visit, I'll be looking down on the couch and have a passing thought of how it was when this sweet red dog was sitting there looking up at me with those eyes that only a dog or a child can give and smile.

Goodbye Anabelle.
Posted by Bill at 10:00 AM