One of the most difficult things you have when your dog gets old enough that the kidneys are going is to find something that they will eat.  It's called "Chronic Renal Failure" meaning, the Kidneys are Going and it's not going to get Better.

It is a feedback loop. 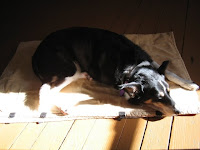 I'm thinking about my own girl Lettie here, and how she is reacting to things.  She's following the path pretty much per the book.

Today, there's a food that she will like.  It's her best friend.  Yum, think Premium Chocolate draped over the most wonderful pastry you've ever had.

Tomorrow she's feeling awful and won't go near it and in fact instead of biting it, she bites your hand.

That feedback loop thing is what you're seeing.  What is happening is that yesterday she ate too much of a good thing and today she's feeling awful.   You, the not completely all knowing human, thinks "Ahh!  yesterday she loved this, I'll feed more!" and reaches back into the jar for "more".

The nonspeaking older dog with bad kidneys, thyroid problems, arthritis, and questionable hearing looks at the offered food and thinks "I feel like crap, go away" and walks into the back room.  You get frustrated and try again.

Eventually that casual relationship gets burned in like that CD you made for the car.   You know, your special mix tape for the old Toyota because the car doesn't have a USB port.

Now you can't feed her "that" any more.

The very "Special Renal Diet" foods that are the best for her are the ones that she hates because to all dogs they taste horrendous.

Good luck with that.

The trick is to feed small portions of each food, one ounce or less at a time, and switch foods each time.  That way she gets confused as to why she's feeling off and will eat later.

Kind of like "NO! Mom NO Broccoli!" from a 2 year old.   That same 2 year old comes back a couple years later and discovers that stir fried broccoli is a wonderful thing and looks forward to the trip to the Chinese restaurant just so they can have some of that weird tree like vegetable.

Ok, so that was my own experience and it really was asparagus which I now love even if I can't cook it right.

Yesterday, that terrible tasting dog food that I used to make snacks was completely devoured.  I mean she was begging all day for some of the stuff.   When I originally opened the can she literally ran from the room.   Almost tail between the legs yipe-yipe-yipe time...

So read on and see if that recipe works for you.  All I know is that when I warm up the oven to make my bread next time, I'll be cooking some more dog food on a separate cookie sheet for her later.

Sliced 1/4 inch or less thin and cooked at least to Jerky texture.  Just the way she likes it.

Good luck people with older dogs and cats, I hope this helps.   If it doesn't, realize that your pet is giving you a course in Dog Psychology.   Become the Dog Whisperer because that's what they need.
Posted by Bill at 9:29 AM