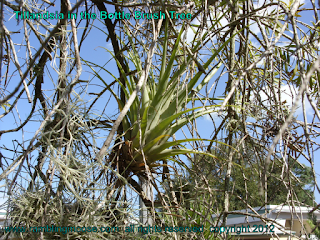 After the little storm we had over last week, I went out and started to pull down dead limbs.

The tree itself is slowly dying, the limbs show that.   Inside the trunk are colonies of ants and termites.

That dying wood is the food for these "Air Plants" that are called Tillandsia.   Not the little things that you buy in the tourist traps glued to a shell, this one is as large as my hand.  Hand sized is middle of the road here, but none the less I was quite pleased to see it here after the storm.

I was going to pull that limb down and get rid of the dead wood, but that plant growing there means that it has a home as long as it wants it.
Posted by Bill at 8:53 AM