I was out having lunch with a friend who I see maybe once a year.  After a very full meal of Chinese Food and some great conversation, I arrived at the doorstep.

That was when it started.   The Sun arrived in a little brown box brought by a truck.

Since the box wasn't for me, I set it on the chair and went about my business.

Later after trying to convince the dog that there were better things than starving herself, and yes, the LettieBurger (TM) was indeed good food, the story began to unfold.

"So, what's in the box?"
"Oh that's the new lights for the bathroom!"
"Really, I had forgotten..."
"Yes, they're Dimmable Fluorescents!"
"Ok, we can deal with that later, lets get Mrs Dog and you ready for the walk around the block"

You see Dimmable Fluorescent! look just like every other compact fluorescent light bulb. They all have that chunky base.  A teeny bit of Mercury in them that make some people treat them like toxic waste.  A whitish helix of glass above the base that emits light.  Connect them up to a normal light socket and they work just like any other.  Light goes on, Light goes off.  Don't get them too cold because they don't like that.

There was a commotion in the bathroom that night as things got hooked up "properly".

"Oh my god this is going to be bright"

I padded into the hallway seeing things I hadn't seen before.

"Is that an ant or do we need to have the house sprayed for pests?"
"Huh? Which ant?"
"I'll get the tape so we can catch it and look under a magnifying glass..."

It was an ant, we can deal with that.

Then I realized why I could see the ant crawling through the short hallway.

"You're right, its going to be bright, and that is a good thing!"

One of the old school incandescent light bulbs was replaced by one of those ugly chunky fluorescent helixes and a smiling face was looking up at it as if to get a suntan.

The light from that one bulb was so much brighter at 26 watts that the walls had begun to change color.   The detail was being washed out of the wall behind the bulb and things were taking on a weird post-nuclear-blast look to it.

I went out to put back the magnifying glass saying "Ok, that's outrageous".

On returning, there was one oven mitt on his one hand, a fluorescent bulb in the other.  "We're going to have a little fun here".

It's not often you see someone coming at you in the bathroom with an oven mitt and a light bulb, and usually it's for creative purposes when they do.

"So you're going to replace them now?"  Thinking the dog walk is going to be delayed... "There's a cell approaching on Radar, I want to get a long walk in and empty her out for the night!"

Being told not to worry, I leashed up Mrs Dog and grabbed the dog bags.  She led the way out of the little laundry to the front door when I saw it out of the corner of my eye.

If you ever had the pleasure of seeing the movie Saving Grace, there is a scene where the men were standing outside of a little pub in a small seaside village in Britain.   It is night.  Someone turns to see the large house on the crest of the hill just outside of town light up as if it were being turned into a landing site for extraterrestrial space craft.

This was my bathroom.

"Don't you think this is a bit much?"
"I'll adjust the dimmer tonight."
"Not if you dim this down you don't"
"Don't worry, it will just make it so the dark end of the dimmer doesn't flicker."
"Ahh, great!  I'm thinking all this light will make working in the bathroom much easier!"

"Hey, do you think we can keep this thing dim for guests?  I've got to clean this place!"

That's just one of the small drawbacks.  I guess it really is possible to have too much of a good thing. 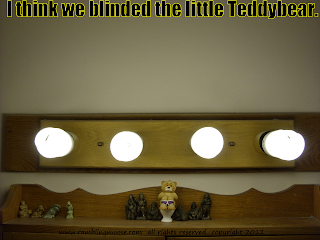