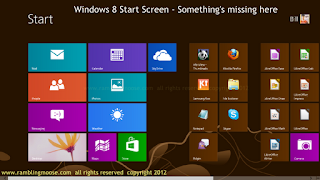 After about 2 weeks of installing software on the Windows 8 laptop, this was what my start screen looks like.

Never mind that in the picture the text is a bit too small to read.  My idea actually, you can't blame Microsoft for that.

I'm doing that for a point.

You see, we have been trained to look at that skyscraper of program names that are groups of icons and more names to find our programs.  If you had someone show you how, you even know that you can pin the ones you like the most to the top of your Start menu.  That has been true at least since Windows XP, and I only personally started using the Pin To Task Bar or Pin To Start Menu a couple years ago when I got my Windows 7 laptop.

It made it quite a lot easier.

With Windows 8 the rules all changed.  You now have a screen.   When you hit your windows key, the monitor shifts to this screen from your desktop or your app.  It does so a bit dizzily as if you are physically turning the monitor to look at the back of it where, surprise! there is your start screen.

Eye candy aside, the presentation is again geared for a tablet.  What you are seeing is my very own start screen.  Big chocolate colored rectangles represent those programs I installed, the other pastel colored rectangles are those that Microsoft put there.  Color is a visual clue.

The rectangle for the desktop is a representation of the background of your desktop all shrunk down.  Makes some sense to do it that way because most of us who will take the time to add your own picture to the desktop will want to see it some time, even if it's only there since we've got too much work on top.

But that raises the question, where is all my "stuff"?

That's just it, the Start screen only has those icons that you put there when you added the program.  Not every program will add an icon to it, so you'll be lost.

What you have to do is search for your programs.

But windows doesn't make it readily apparent how you do it... the combination Win plus the Q key will work and has worked for a couple of versions back.   With all this nonsensical gigantic icon crap going on, there really should be an icon there with a magnifying glass saying "Find my Stuff".

Ok, so that not withstanding, here is what you get in Windows 8 when you do the search by hitting Win + Q: 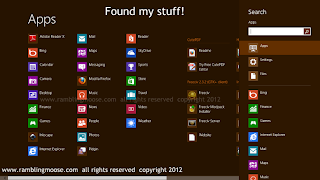 Better get used to seeing this screen.  While most folks use only a few programs in the course of a day, this is geared to your using "Apps".  When you find the app you want, right click on it and add it to your start screen to save your sanity by clicking on the "Pin to Start" button.

By going through all these steps that should have been done for you, you'll have the ability to use the app.  It may be in the desktop which is not where Microsoft wants you to run your programs, er, sorry... Apps now.  No, that's a very different space.

You see Desktop is now intended to be the place where only the grumpy old programs run that don't look like your New And Shiny Apps.  They don't really want you in the Desktop any more.   Microsoft are betting the bank on converting your desktop to a big old Tablet computer.

The biggest problem I have with Apps are that they are full screen.   Just like your Android Tablet or iPad.   Great.  That will work for some folks, but if you use a computer professionally, that gets old very fast.   Sure the Apps are intended to give you the same functionality that a windowed app would, but these new things take up the entire screen.

That works great if you're using a Surface Tablet.  That works terribly if you are on a laptop.

Think about how you actually WORK on a PC.  We're not talking about playing a game like Solitaire.  In fact, Solitaire was not installed on my Windows 8 install, I would have to add it at their App Store.  Just so Microsoft would be watching over you when you get your new apps and know what you are doing.... just like Google and Apple do every time you run your app there.

So now you sit down and find your copy of Microsoft Word and Excel, and normally I start three Excel windows, one Word window, and Firefox every time I start the computer.  Since the new idea is to go full screen, what do you do if you want to refer between two of those windows?  Better get used to full screen app flipping and being much less effective at your job because now Word and Excel will be (eventually) full screen apps.

Despite the fact that the latest version of Microsoft Office doesn't really work well with being an App.

You get a lot of visual clues if you run a windowed operating system in a windowed mode.   Some folks will use their browser full screen, and if that is their choice, my recommendation is to be happy with Windows 8 or a Surface tablet.   Everything will look familiar and fairly new.

If you find this app flipping confusing and wonder why you can't keep a calculator app on your desktop visible when you're trying to get back to Word... you will find yourself frustrated beyond words with Windows 8.

Frankly they broke the way you will work.

You see, while the Desktop is in its own little penalty box of Desktop Land, all the Apps are in their own place of App Land.  You'll have to find the little hot corner (Upper Left) and hope you have the mouse cursor jammed up there long enough to see the little icon fly out so you can pick your app.

All of this is very clumsy on the desktop where you're used to having precise control over your mouse and selecting things as small as an individual dot.   It has to be because on a tablet there is no mouse, there is only your finger.  Some of us have very large fingers indeed, and Microsoft has done a fairly good job of accommodating that, but if you are not using that touch screen you'll find yourself scratching your head and thinking what were they drinking or smoking that day when they decided to go with this way of doing things.

In my case, I'm looking forward to my next weekend project - getting rid of Windows 8.  It's terrible.  At least Windows Vista was useable!
Posted by Bill at 10:02 AM