The Nice Thing About A Dry Spell

As Sophia would say on the Golden Girls:

We were out having a cookout this weekend.  Of course.  It's pretty much required.

There was a varied menu.  For four people, one nosy dog, and a grouchy parrot, we had a table leveler of a meal.

What's a Table Leveler?  So much food that the table won't rock on the long leg, of course!

The corn had been soaked in the husk and grilled on the grill.  Three sides of the grill had some yellow sweet corn surrounding it, you know they're ready when the outer leaves begin to turn dark brown or even a little charred.

The burgers had just come off the grill and are sitting inside on the counter.

Large "vat" of baked beans were cooling from Volcano Hot in the kitchen.

There were two types of Baked Potatoes:  With or Without Dill.  Still in foil, they would join the rest of the food when serving time came.

I was outside with my neighbor, Bill.  His mom Lisa was indoors in the cool.  Kevin was making sure the final preparation was done by pulling the Cherry Cobbler Pie out and placing it on the cooling rack on the room divider.

We were grilling Bill's favorite cut of steak, DelMonico steaks.  They looked like little Filet Mignon steaks with fat marbling throughout.  They had had 5 minutes per side, and since they were thick I was testing them to make sure that they were done.  I was shooting for 150F, Medium Rare.

After 10 minutes of intermittent hovering, they hadn't gotten finished cooking so I was standing next to the grill obsessing.

Kevin came out for the burgers and the corn, then left for the cool of indoors.

Bill and I were standing out in the yard next to the grill.

I was on guard as usual.  Looking for the girls.  Grills and Girls.  One makes the food, the other makes you the food.

The Girls were uninvited Guests.   Usually I carpet bomb the yard with canned poison to raid them out of their homes.  They don't belong in my life in any way, shape, or form.

The Girls were the swarms of Mosquitoes we get here.

Snowbirds staying at the beach don't usually get them because it's too salty right there, but I am two and a quarter miles inland.

The thing is that where I was standing I wasn't being bothered.   I am usually watching very closely to make sure that I'm not getting bit because I have "Sweet Blood".  Whatever it is that a Mosquito likes, I make it.  She's going to home in on me, and the biters are always "She", and try to make a meal out of my ankles, or any other part of my body.

I was in Jeans and a dark grey T Shirt, so I closed the lid and moved under the Lanai.  There are normally more mosquitoes there since the neighbor's Air Conditioning Unit drains into their side yard, and our irrigation system waters the Bougainvillea every day.

But nothing.  Sure, it was the warm part of the day, but I have never been On The Lanai without having to watch.

It has been about two weeks since the ducks were using my swale as an impromptu bathtub in the last rains that flooded the streets.  Now it's dry, and the dogs are sniffing the pavement for Garbage Truck Goo as we walk the neighborhood.  A frequent rain in the almost tropics keeps the dust down and washes the Goo into the grass, so if the dogs are sniffing the pavement, it has been a while.

But I, The Mosquito Hunter, have been unaffected by my little girls.  It has been a while since the last bite. 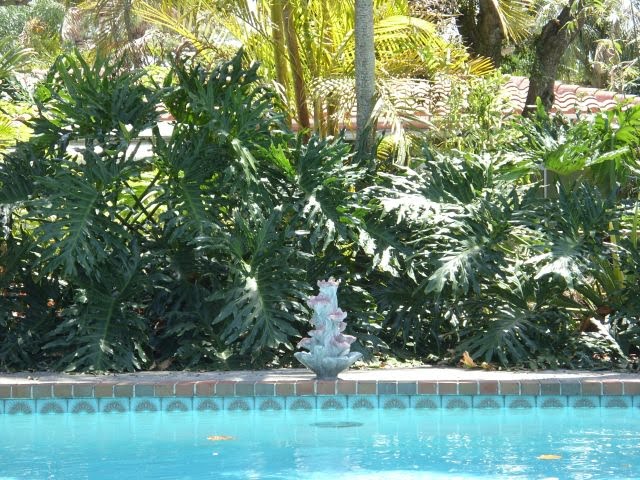 I can tell just how dry it is.  If I go on the East side of the pool, I don't get clouds of my children following me - even next to the row of plant pots that are there.  The West side of the yard has a large hedge along it of Night Blooming Jasmine.  The hedge on the East side has Podocarpus - Japanese Yew to their friends.  Both hedges get watered daily with misters and drip feed irrigation to save water.  Step too close to the hedges and ... There they are!

It has gotten so dry that the mosquitoes will retreat to the hedges during the day even with 225 pounds of tasty Moose walking around the yard.

Since there are going to be workers back there I'll resort to chemical warfare in a can.  Once the sun came up I had an excuse to spray insecticide through the hedges, in the pots and underneath where the hedges are moistest.  I might just be able to be unscathed.

It was nice to have a little freedom while making a steak.  I wouldn't want to make the mistake of thinking this is an ongoing thing.  After all, while it is an El Nino, it's only a tendency toward dry and cool and that is relative.

Just like the girls.  Relative.
Posted by Bill at 9:05 AM