What Do You Do At 4:30AM When You Have House Guests? 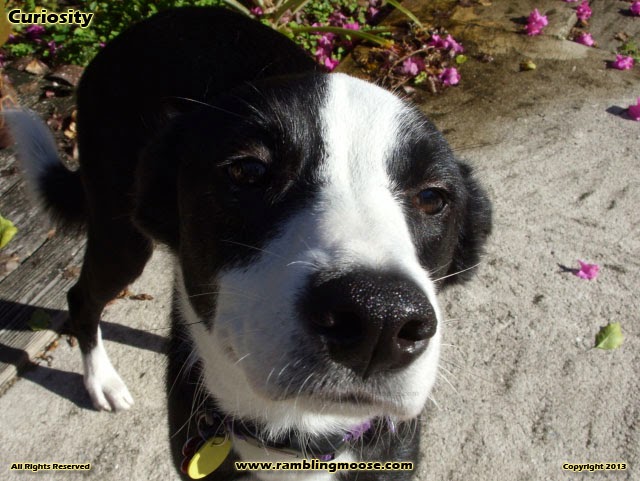 The first thing I saw was a black nose.   I didn't know it was a nose, I just knew it was in my face and in my left eye.

I opened the other one just for good measure.

Having stirred in my sleep, I awoke my dog.  He returned the favor by awaking me.

Seeing the clock glowing the hour of stupid O'Clock in a brilliant teal, I tried to convince myself that getting out of bed at 4:30 in the morning was not a good idea.

That lasted for all of about 15 minutes.

Rack had settled onto the cool terrazzo next to the bed.  I rolled over, draped my left arm down and began giving him some well earned belly rubs.  If you can't get back to sleep, you may as well make someone feel good whether that someone has two legs or four. 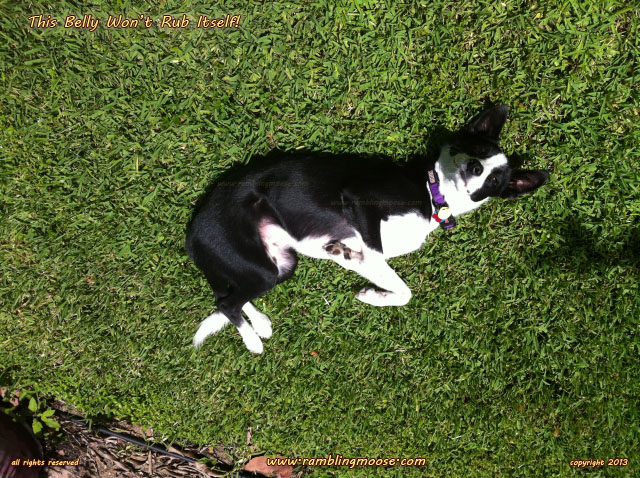 He flattened out and splay his legs to the four cardinal points of the compass.  Amazing how flexible a herding dog can be at times, as his muscles relaxed and contracted under my hand.  By the time I gave sleep a second shot, he was turned into something resembling a canine pretzel in the predawn gloom.

I rolled back over and pulled the covers up with a groan.  5:00am.

Closing my eyes, I entered that semi sleep state that we all are annoyed with.   Too early to get up, too late to fall asleep, I knew that it was going to be a long day or perhaps a longer day than normal.

Watching the night draw to a close through the inside of my eyelids, I pretended to ignore the flashes.  My mind hadn't completely shut down, nor had it completely rebooted to full speed, but I did realize that it would be a good idea to haul my own bulk out of bed and get going.   Dog walks are a logistical problem when you have 45 pounds of bouncy active black and white fur covered muscle that simply wants nothing to do with the storm that was dousing Dania and Hollywood, and surrounding my house on three sides.

I had to call Rack three times simply to get him out of hiding.  Him being in the bedroom next to me is one thing, having to go for a walk in that nonsense was another.  Didn't his human realize that being out in a Florida Thunderstorm was dangerous?  Didn't he have the common sense to be afraid?  Didn't he realize that walking wet was unpleasant?

It was a choice of getting out into the wet or getting out the mop and cleaning up the wet because it became too much of a wait.

Rack finally listened to my bellowing Come Here! and at 5:30 and we began to suit up for the weather.  He was vibrating.  I'm used to him being fearful, but this would take a bit more coaxing than usual.  I managed to get the collar on and felt him shivering.  It was more of a constant vibration with muscles moving in a sinusoidal motion under the black fur.  The white parts moved as well but you can't see those in the morning gloom.

Fla-BOOM went the weather.  No sounds yet from the rain.

After pulling Rack to me three more times, I managed to get the harness on, double locked to the collar, and around his belly.   We were on our way.

There's a rhythm to the city you get at this time of morning.   People were just getting up, and true to form, I was able to get out before most of them.  The street was dark, but way off in the distance, the approaching 5:45 out of Miami was coming up the FEC corridor.

Yes, I heard a train, but this time it was a real train and not an approaching weather front.   We would be able to get the majority of the walk in unscathed.  I didn't even have to open the umbrella.  To call it an umbrella was a bit unfair.  It was a golf sized purple and black carbon fibered weapon against torrents.  Exactly what you need in Florida since lightning can strike 10 miles away and the airport was only 8.

We started walking.  Rack's breath was more like a panting.  He was doing his impression of a steam locomotive.

Rack, you sound like the Hooterville Cannonball, Easy!  We could still stop in the Shady Rest, I hear Kate is serving up a roast with sauerkraut, biscuits and gravy, and fresh made pie!

Not even an ear perk.  I wasn't going to be in control even if the rain was far enough away not to even drip on my arms.  But that pie sounded good.  Never did get Biscuits and Gravy that morning.

We walked around the neighborhood and out to The Drive.  It was unproductive but fast.  I was being pulled around the block at a marching pace.  The Train had gone through and the parrots were arguing with the rain that hit them from above.  Contrary to my own Oscar, these feral cherry headed amazons didn't want to be knocked around before six in the morning by atmospherics.

They were quieted down for a moment by the same lightning strike that hit south of us and left a purple afterglow on the retinas for another minute or three.

Air conditioning compressors were roaring loud enough to drown out some of the other noises, and join in with the rain that was just beginning.  Toads in the sewers making a racket would join them.

Still no Train Approaching sound that meant Duck and Cover.   We walked through the parking lot.  Rack was well out at the end of the leash stretching my right arm an extra inch or three.  I had my shoulder wrenched as we rounded the last corner near the house.

Not so fast, boy, you're not finished.

We did our block again.  Just as he began The Dance, the rain hit.  Hard.  Golf Umbrella deployed we walked home in the gloom.  Alone with the weather, even the parrots were silent.
Posted by Bill at 9:29 AM