A Half Moon of Dog Food

It's there.
I never know when it will disappear.
But it's there.

Starting at some insane hour of Stupid O'Clock, our day begins.

Shortly after I haul my bulk out of bed, and shortly before we go out to greet the pre-dawn day, I pour out half of my dog Rack's food.

He promptly ignores it.

He may get a drink of water before he leaves.  Because, Dog.  That's why.

I've never met a dog so indifferent to eating.  I was originally a bit hesitant to put a metal bowl of food on the ground.  Lettie would eat so fast that I'd half be expecting to see sparks fly from the bowl.

Rack has been known to ignore breakfast until sometime after 9:00.  That's in the evening.  He'll just skip a meal.

Food?  Meh.  Never has been one of those things he was concerned with.

Why?  I guess he's trying to maintain that Swimmer's Build he's got.  Lean, rippling muscles under black fur, glistening in the sun when he bounds through the jungles of South Florida.

But food was never a driving thing in this dog's life.

He'd taunt me some days.

I'd be in the kitchen before dawn, making a little something for my own breakfast.  Bowl full of dog food's best, nutrition for canines, sits there ignored.   My own food might be something more interesting.

I'm being peered at by twin nut brown eyes, laser beam intensity pointed directly at my soul, melting me into a pool of...

He cocks his head a good 60 degrees to the right.

I go back to making coffee turning my back to him.

I hear him nuzzle the bowl.  A bite is taken.

My own start to the day is done.   I look into the bowl, it's holding brown pebble like bits of kibbles, no longer even, dented in one side.

The dog has disappeared to where ever it is that dogs disappear to.

I settle in and go about my own business.  I've got things to do and I will tease the dog later.  Maybe drop a few dog cookies in and mix it up.  I can sometimes get him eating with that trick.

I temporarily forget the stealthy dog hiding in a corner under some furniture creating a den analogue off in another room.  The music I've got on the headphones creating my own den to forget about the world.

Hunger wakes me from my chores.  I pad into the nearby kitchen.  Glancing at the still ignored bowl, I shrug and go about my business.

Fixing the first course, I'm leaning against the counters.  Leaving a stripe of wet on my jeans, I vow to do a better job at tidying up the place.  Not that I've ever been all that good at tidying up anything.

More nut brown eyes laser beaming at me, I let Rack outside.  I'm chopping onions and it's not something for dogs to nibble on.  He goes out to do a perimeter search of the yard slowly replacing his own scent marks that he had placed there yesterday.  Pesky irrigation system washed them away an hour before.

I'm forgetting about the world again creating more breakfast.  Turning to the sink to pre-soak the skillet, I see him sitting outside the back door.  I apparently haven't paid quite enough attention to the dog.  After all, that is why we're here, right?

Letting Rack in, he immediately comes in and magically starts eating.  I relax and join him in my omelet.

He wanders off and I'm presented with a half moon of dog food.  Weird dog, he's making shapes again.  My 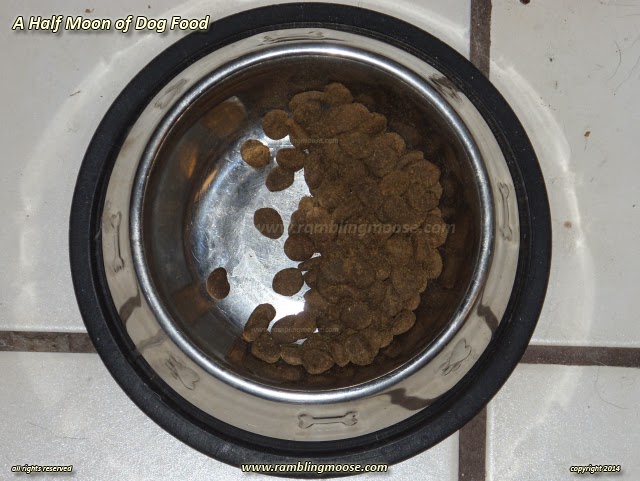 own Charlotte's Web of Dog Food strangeness.  I am reminded of my own childhood games with breakfast cereal - eat all the oat shapes first so you have a bowl of marshmallow bits to scarf down in a soon to be created sugar rush frenzy.

Going back to my own responsibilities, I manage to get through all the morning tasks.  It's now lunch.  The half moon is still sitting there staring me in the eye.  I pick up the bowl, give it a shake and a sigh.  It's time to park it under his nose again, maybe the dog will finish it, maybe not.