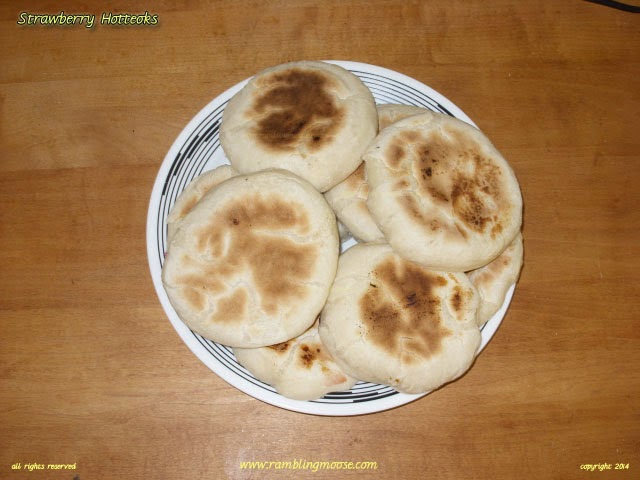 I got the urge for a Jelly Donut.

I was thinking about trying my hand at making some proper donuts, yeast raised dough, a jelly filling, and probably was going to dust the outside with some brown sugar after frying.

I realized that I don't really like to fry food, and I dislike waste.  Instead of wasting the oil in a big pan, I thought I could make a hotteok instead.

Hotteoks are Korean Street Food.  Basically you make a donut out of raw dough, toss it on a oiled or greased skillet or griddle, and press it flat.   It will cook basically like a fried egg omelette will, the bottom will crisp, the "down" side will cook, and when done, flip and repeat.

Skillet temp will easily get to the needed 375F to properly cook.

The Hotteok, traditionally, have a brown sugar filling that melts with the heat to make caramel, and is to be eaten warm or hot.

I didn't want a caramel brown sugar filling, I wanted a jelly donut.  Just one would do.

That morphed as well.

If I only wanted one, I would have to bake the rest of the dough into rolls.   The freezer had just been crammed full of food the night before with a trip to the warehouse store.

May as well make a batch of Hotteoks.  I can wrap each leftover one in its own bag and slide them into nooks and crannies in the freezer so six months from now I can find the stray one that disappeared behind the frozen peas.

Jelly Hotteoks.  I am sure the folks in Seoul Korea will allow me this little change in recipe.

I had killed my bread machine a week before with making the jelly for the filling.  I actually had made a quart of Strawberry Jelly because I had a quarter flat of "B" Strawberries.  B Fruit are the ones I tend to get because they eat the same, but tend to be a little crooked or misshapen.  Clean them up, toss them in the bucket of the bread machine and an hour or so later you get jelly.

My bucket had been missing the rubber washer in the middle that makes the machine water tight.  So Partially cooked jelly worked its way down into the machinery of the bread machine.

Scratch one gummed up bread machine.  But I did have that jelly.  The strawberry jelly was thick enough that it didn't leak. The cherry jelly that I made after was not, and that was what killed the machine.

Schedule one future trip to the thrift store for a new-to-me machine.

I made the dough in the stand mixer, allowed it a rise.  After the first rise, I rolled out 10 equal dough balls.  About 80 grams of dough a piece if you're counting - 3 ounces or so.  Flatten the dough ball, spoon in 1 teaspoon of strawberry jelly, and a quarter to a half teaspoon of Cherry jelly.  Ends were pinched together like a Chinese Bun, and allowed to rise a second time.

When they were back to being big and round, I had heated my electric skillet out and cooked them to perfection.  Crispy on the outside, soft on the inside.

Since there were 10 of the things, I put the remainder in the freezer, save one for tomorrow.

Tomorrow ended up being a day or two down the road.   Weirdly enough, they turned into great "pop tarts" when dropped in the toaster oven for a cycle.   Even better then because the flavors melded, and I got a real crisp outside.

So THAT is what happens when you turn a white dude from the South Jersey Suburbs loose on a South Korean traditional Street Food.  You make the freezer bulge.
Posted by Bill at 9:28 AM