I really didn't have to try hard.  I had just stepped out of my house.  Late morning too, I had actually slept this particular morning to Normal o'Clock, or 6:15 in layman's terms.

Rack was in his usual bouncy self, and really beyond cuddly.  He slowed me down even more getting out of 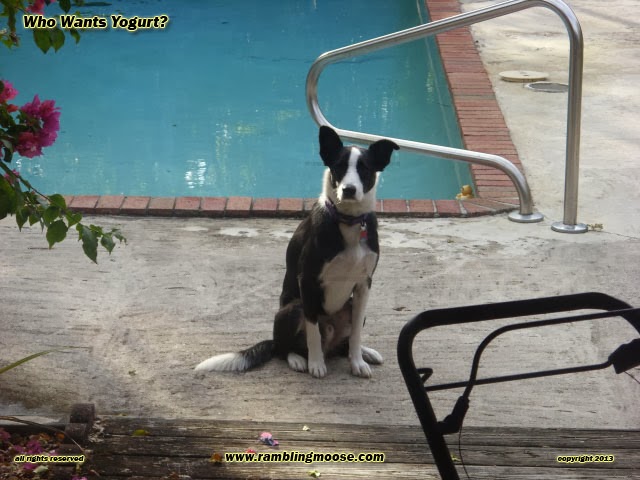 the house.  I got him dressed with harness, collar, and leash, and thought "Every Time I am Late, Weirdness Happens" and stepped out into the great South Florida Morning.

It was even cool this morning, which is truly strange for Almost July.  Invigorating coolness hit my skin, all of 78 degrees.

There's a reason why Crockett and Tubbs dressed the way they did on Miami Vice.  It's bloody warm down here all year round, and when I say, truthfully, to me that 78F/25C is cool, you know I have adapted.

Only Rack had his fur coat on.  I had a T Shirt and Cargo Pants.  Mosquitoes are everywhere.

We left the block, and I asked my faithful sidekick to "show me walk", and he did.  It is a much better walk when he chooses the route, and since my scared little boy is terrified of noise, it was not a shock when he chose to avoid Wilton Drive. 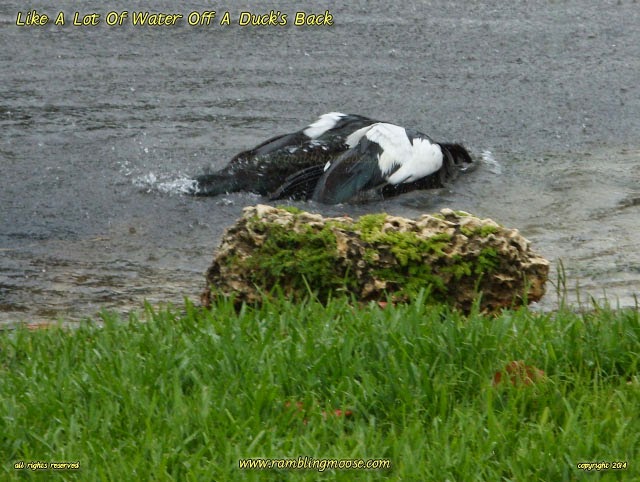 a great hurry to get away from something that must have moved a mile away.  Feeling the wing tip wash past my face I shook my head and thought "Daffy Duck is confused today" and kept moving.

Sniffing the air, listening to the crickets, and generally enjoying the sunrise, we slowed near the little M.E. DePalma Park.  It gets me thinking of food every time I walk past since it smells of Oregano due to the plantings of wild and native species there.

As a result, later when I got home, I made a giant table leveler of food including Sausage Flavored Potato Chips, Home Fries, Two Egg Onion Omelette, all served with a griddle toasted buttered English Muffin.  The Bread Machine is busily churning away an experimental Ginger Bread Loaf for later, and I have my eyes on a Stollen Recipe if I can find candied fruits, six months out of season.

Menu aside, Rack alerted.  He started wagging his tail which meant I was approaching another dog.  I had my flashlight out since it contains a taser.  I won't go without it since the last time I did, we got attacked by a pitbull.  Some people need to be put down and the dog retrained - or the other way around... Either way is fine by me.

Rounding the corner I saw a beautiful German Shepard Dog.  Past his puppy stage, it was full sized.  The dog was aware of us, and gently wagged its tail.  It's owner, someone who I had seen occasionally and only when we were out past our usual Stupid o'Clock, was picking up after her dog.

Rack was veering toward the dog and wagging his tail vigorously.

The German Shepard took a step forward while the owner was bent double picking up what the dog had left there.

Remember Barbara Woodhouse?  The dog trainer from Britain who advocated a stern pull on the choke chain when the dog got out of hand for any minor infraction?  This woman clearly did.  She yanked the dog back so firmly that it stumbled to get its bearings.

When it recovered it seemed to say with its eyes "Get me away from this insane woman, please?".

I looked down at my own Rack and said "Rack... Show me Walk" in a conversational tone.

He simply stopped looking at the other dog, and moved on his way.

Some people are out of control but can be retrained.  I wasn't getting involved since I hadn't had my coffee yet and the cook-a-thon was an hour or three in my future.

I'm a strong believer of gentle commands, but reserving the option to get louder as the situation demands it.  Some dogs are so excitable, that you simply can't even conceive of letting them off leash.  Rack is that way now, if he sees a Friend Dog, or a Friend Human, he begins to jump as he gets excited.  When a McNab Dog Jumps, we're talking 45 plus pounds in the air, shoulder high.

He's learning.  He used to be a 12 on the 10 point scale, he's now an 8 or a 9 and even better when there are no interruptions around.  I now have him so that when we're walking, simply saying his name in a conversational tone will have him circle back and plaster himself against my legs for a little praise.  Admittedly, I have work to do.

Remember, it is a marathon, not a sprint.

This poor German Shepard was reacting at about a 3 or a 4.  Certainly didn't need to be yelled at and yanked off its feet.

It was as if you were in a conversation with someone and you asked them where the main street was and immediately they began to scream at you.  We all know once you raise your voice, you lost the conversation.

Or your mind, you choose.

Every neighborhood seems to be chock full of dogs.  Not every dog has a partner, some unfortunately, merely have owners.  Some of those owners, sadly, simply have no clue.

Training a dog is nothing more than a conversation.  Some dog breeds are known not to be trainable, such as an Afghan.  They're good at whatever that breed was good at.  That just may not be what you expect in a companion.  Each breed is more than a collection of fur, length of leg, shortness of muzzle, and other random attributes.  A Breed of Dog is also a collection of abilities and capabilities.  Some are hunters and will do poorly in a house with plenty of squirrels on the back porch.  Others are simply too big and lumbering to do much else than lounge on your couch and good luck training them not to go on the bed.

The hardest thing about training a dog is the human - convincing them that the dog that they are planning to own will fit them.  If you have a dog breed that is know to be highly athletic, don't be surprised if when you come home from work you won't be able to live that sedentary life because the couch sitting under the window is torn to shreds because 4 hours ago there was a critter running in view.  The dog won't even remember why it's like that so don't bother scolding them.

It's a conversation, and you don't know the language.  But you can learn, and your dog will do its best to teach you.
Posted by Bill at 9:42 AM