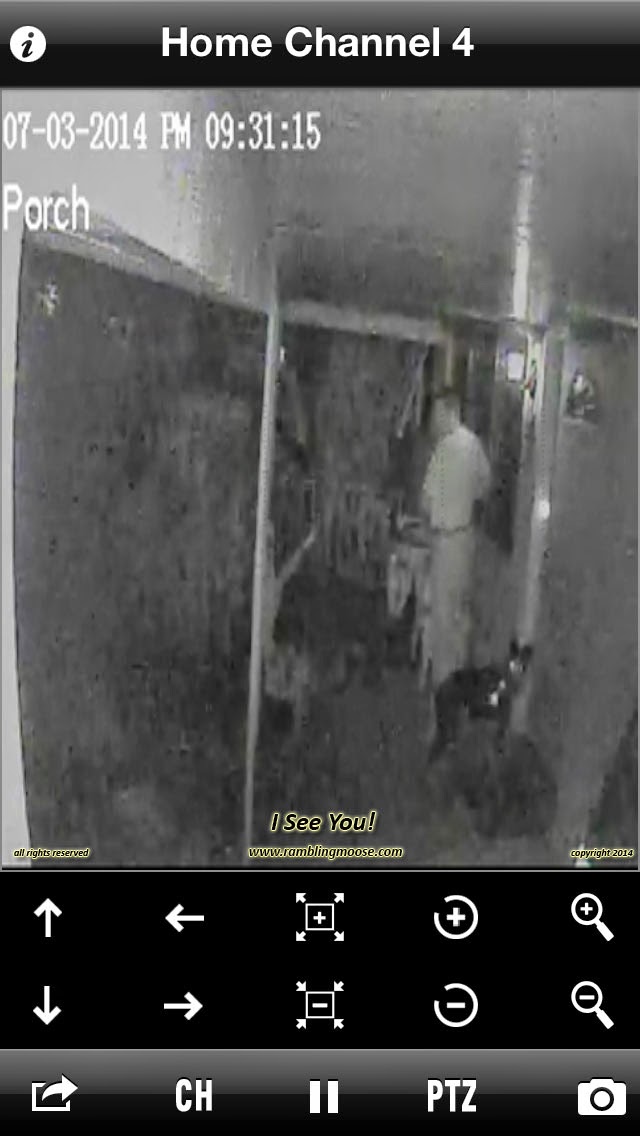 They're interesting beasts.  I have installed them professionally, and we installed one at home.

They're not all they're cracked up to be, but there are some things to be aware of.

Outdoor cameras don't always perform as well as you might expect.

I think this was what I was being told when I received this picture.  Partly at any rate, and partly because Kevin was gone and looking at my porch from the Auto Train.  He was sitting there most likely somewhere in Georgia on that night, maybe feeling lonely, missing me, or just being curious as to whether he could catch me coming and going.

We've had the DVR, that's like a VCR but no tapes used, for about 4 months now.

We've seen some pretty odd things in it.  The scooters that ride past the house in the small hours amused me, but I am in Florida and a scooter can be viable as a "daily driver" here - if you don't mind being hunted down by snowbirds who have yet to learn to drive.

The ducks on the lawn are amusing to watch.  The hedges that are "in frame" are visited each morning by them when they're grubbing around in my indifferently maintained gardens.

No, really, there are hedges there, you just can't see them.  On the left of that pole.  See the shadow?  That's a hedge although you couldn't prove it by this picture.

And that's the rub.  They promise 30 feet of Night Vision, typically, although some promise more.   It is like the mileage claims for a car when they say "your mileage may vary".

My version of that is "Never Trust A Chinese Manufacturer".

You couldn't use that picture in court to prove that yours truly was at the front door with his faithful sidekick, Rack the McNab Dog, could you?

You could try.  I've heard some pretty sleazy tricks in what passes for a court room in this country, and I try to avoid court rooms as a general rule.

So a few basic rules?  I'll keep them as brief as possible.

Night Vision.  They slap that array of Infrared LEDs around the lens of the camera.  It puts out a glow.  It will have a "Feet of Vision" attached.  Divide that by two to get your real distance, seriously.  Just like the MPG scores on a car, your mileage may vary.  After all, I can get 40 MPG rolling down hill in my Jeep at 40 MPH.  I've seen it.

HD vs SD.  My own opinion is why not both.  Put SD cameras (not as sharp) on things that you will watch from "close up" like your front door, and then put the good HD cameras on things that you want to see crisply.   You may even be able to use fewer cameras by using more HD where you need it.   Instead of my having two cameras on the driveway and one that leaks onto the front yard, one HD camera may do it.  That will save a couple channels for use elsewhere.

Number of Channels.  My DVR will record up to 8 channels.  Some do 4.  The most I have ever seen is 16.  You probably don't need 16.  Really, you don't.  You will want to save recordings, so get a big hard drive for the machine of at least 1 TB and roll with it.  It doesn't have to be fast since you're not recording a lot all at once.

I will say though after looking at that picture... it needs to have the camera moved.  That's just too fuzzy to be worthwhile.   Maybe closer to the front door.

I wonder if I can convince someone else to go up on the ladder.  I hate those ladders.  Nothing looks more ridiculous than a tall man well over 6 feet trying to balance on one of those things.