Pumpkin Pie Spice - For When You Only Need A Little 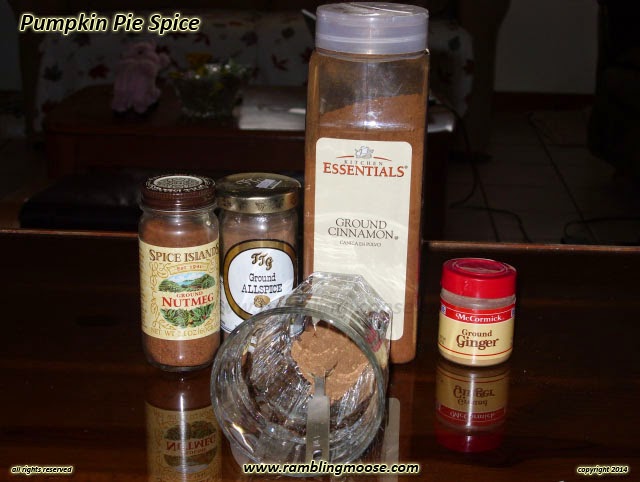 I had all this stuff out in the kitchen on hand.  In fact my spice rack got so large that we had to put some hanging wire spice racks on the wall behind the door.  Six feet worth of spices.

You may have all four spices on hand.  If you make things like Gingerbread or Spiced Bread, you certainly have most of it.

The Allspice is a bit more uncommon in American Cuisine, but I had it leftover from my move here back in 2006.  It is popular in Middle Eastern and Caribbean cuisine, so if you ever tried to make some of that, you'd have it around.

Pumpkin Pie Spice on the other hand is a bit more of a single purpose thing.  It goes into pies.  It goes into some breads, usually with a can of pumpkin when you want "That Taste".  But other than that, I'm hard pressed to figure out why it is here.  A small can of the stuff lasted us for years.

Why keep it when the recipe is so simple?

I needed a teaspoon of the stuff.  So the recipe is for exactly one teaspoon.   If you need more, scale it up.  If you need less, scale it down or just make it and take what you need.  It's that simple.


Remember, the recipe may be scaled to your needs.  If you need more, just double or triple it.  If you have leftover spice, store as normal or add to a candle or potpourri.
Posted by Bill at 8:58 AM