I don't particularly "get" tennis.

You buy tennis balls in bulk.  Hit them over walls and fences that never seem to stop that line drive.  Grunt and sweat, and try again.

At least it is harmless, even if I can't wrap my head around why people want to stand on a clay court on a hot summer day in the Florida sun.

It does have it's benefits though for us pet owners.  Those wild line drives.   I've found tennis balls around town.  I have found them a block away, which leaves me scratching my head.

I guess a Labrador retrieved it and lost interest.

Keeping a supply of them on hand, I tend to try for new uses for them.

I did try bouncing the things to try to get Rack interested in A New Toy.  Nah, he was bored with them.  Every so often he will pick them up and herd them into a spot so that they can be watched in case they escape and try to make a run for it.

Lettie loved the things.  If I bounced one into the pool, she would hover at the edge alternately looking at the ball, and at me, and asking if I would be so kind to get that for her.

She was an intense dog.

But Rack seems bored by them.  He'll watch them bounce after things with a Jeff Spicoli stoner look on his face then glance back as if to ask "You really expect me to get that thing?  You don't know where it has BEEN!".

I even tried Lettie's favorite trick.  Slice the tennis ball open to make a change purse.  Maybe a two inch slice.   Stuff it full of dog food or treats.  Then roll it past the dog's nose.

You just gave a dog a solid half hour worth of fun.  They won't be back for attention for quite a while.

Two problems with that.

First, Rack doesn't have a prey drive.  None at all.  He sees cats, lizards, snakes, and other things that go bump in the night on a daily basis.  Nothing.  He got hissed at by one of the herd of ducks we keep running into here.  Muscovy Ducks are to be looked at and ignored.

Second, Rack hardly eats.  It's something I worry about, but am finding ways to manage.  If I put a bowl down it is more of a surprise than you would expect if he actually immediately ate it.   He may ignore it for an hour or so and come back, or just skip the meal until the planets align and it is once again The Age Of Aquarius.


I have to put his food next to his bed so he can dine in the middle of the night while I sleep.   Just lol his head over the edge and get the food into his mouth.

That left me with tennis balls.  All over my house.  Under the furniture.  Wedged on top of the dog's crate door to hold it open.  Under my bed.  Gathering dust.

Some of them are slit open to accept some tasty morsels in case Rack changes his mind, but I really don't expect that to happen.

The other day, Oscar got loud in the way only a parrot can.  He started chattering and screeching to the 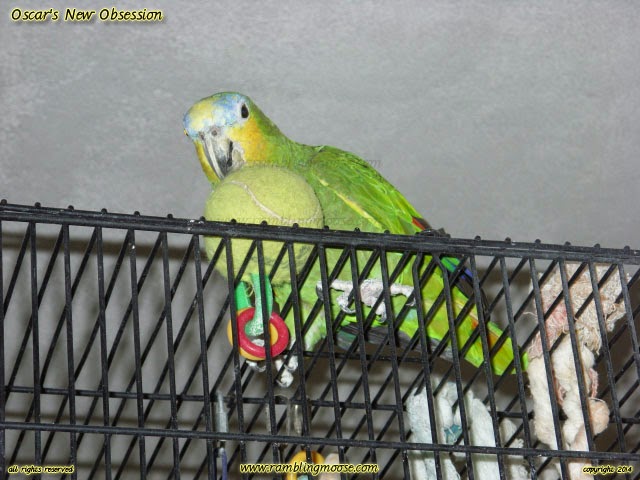 conversation I was having in the house.  Here's where the tennis balls came into play.

Oscar was inside the cage.  He doesn't like New Things.  Parrots are prey animals, so New Things may attack.  Guilty until proven innocent.

A New Years hat that was saved got put there.  Oscar didn't like that but it shut him up.  After a minute or three I walked over and took it off.   Oscar calmed town and went back to chattering.

Out came the tennis balls.

He's not completely terrified of the balls.   He knows he can reach under them, and if he gives them a nudge in the right direction, they will roll off the cage.

Which was what he did.  No problem, he understands that he can do it and it keeps him quiet until it hits the ground.

So this time I grabbed the ball with the slit in it.   I have a plastic loop with a couple rings on the bottom wedged into the wires of the cage.  He has pretty much given up trying to move that thing.  It won't go.

I got the tennis ball with the slit in it and opened it to wedge on to the top of the loop.  There is a blue plastic ball on there that keeps it in place.

So now we have a tennis ball that won't move.

Oscar is smart enough to understand that he can chew the opening, and the fuzz.  Since there seems to be an endless supply of tennis balls here in Wilton Manors that go astray at the park, I'm hoping he destroys the ball.

I added another two to the collection just sitting on the cage.

This particular morning, Oscar got loud when I was making breakfast.  Since I was going to sit next to his cage, I opened the door.  I would see if he got into anything he shouldn't have, so it was safe.

Up to the top of the cage immediately to investigate those three balls.

Two got knocked off in short order.

Oscar tried to push that third one, but it didn't move easily.

Grabbing the fluff, he managed it to the edge of the cage but it didn't fall.

After a good solid 10 minutes of this, he merely accepted it as something that just was.

Walking over to the corner of the cage, he fluffed out his feathers and went to sleep.  Dreaming of the sexy ring neck dove that comes by the window to visit, no doubt.  They could share their avian dreams of tennis balls that can be ejected onto the floor with ease.

There's always a human to pick them up at any rate and set them back on top of the cage.

Who knows.  Oscar could just be trying to get the dog to fetch.  After all, Lettie would do that.  Oscar would toss the ball off the cage, and Lettie would tear after it.  I'd find the ball later under the bed or some random piece of furniture, but by dog, that was where she wanted it!

I'm still finding those silly things.  Right where she wanted it...
Posted by Bill at 9:41 AM