Ok, Rack, You Win, Have Some Yogurt

I'm not used to fussy eaters.

I've not been a fussy eater since I was a pre-teen brat, and none of my pets have ever been.

Fish will gloop at the top of the tank if you walk past it.  No, really, I used to have fancy goldfish that would swim to whatever side of the tank I would sit at and then swim up and down the glass trying to get my attention.  I would feed them.  Pavlov's fish I guess.

My parrot, Oscar, begs whenever I go into the kitchen.  He will drive me into the laundry room to eat some days with a constant patter of "Hello!" and "URP!" to try to get me to share.  It's especially disturbing when I'm eating eggs.  Kind of a weird cannibalistic parrot chicken egg thing.

Lettie, my departed dog, would scarf down her food and want more.  Up until the end when chronic renal failure took her appetite away, she would still entertain food.  I had to syringe feed her for six months, but she would still eat until the last weekend. 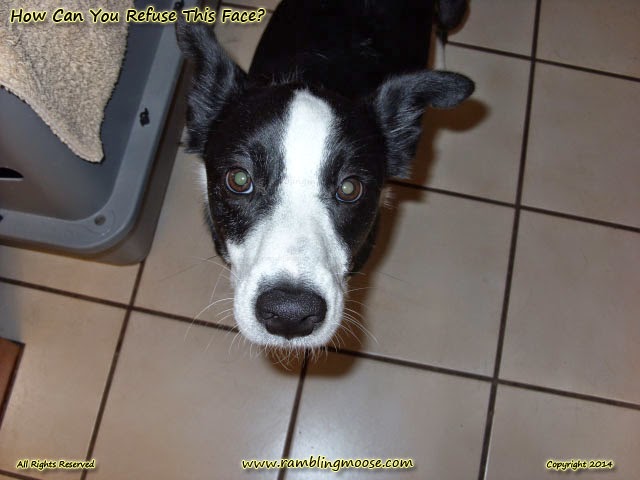 He's a Fussy Eater.   I'm not used to this.  I didn't expect it out of a dog.  Dogs are those creatures that you could take a pill, wrap it in a piece of cold cut, toss it over your shoulder, and it would never hit the ground.  Lettie was like that.  Rack is definitely not.

I feed him the best rated dog food I could find.  I think the "mass market" dog food I used to feed Lettie is what was her end.  As a result, I feed Rack Orijen food.  It's got very little waste, and everything is locally sourced.  No Chinese Crap.  It's bad enough when trinkets self-destruct within the first week you buy them due to bad materials and workmanship, I don't want bad Chinese garbage getting into my dog's diet.  Syringe feeding is not a bonding experience anyone wants.

I have the bag of the food at the edge of my kitchen.  It comes in a large mylar plastic sort of bag that is vacuum sealed.  You open it up and it smells like food.  No, I mean "FOOD", as if to say some sort of a stew that you had cooking in the crock pot all day and you can't wait to dig in.

Human grade foods go into the stuff, so I guess in an emergency we've got supplies for all.

Except I think my dear furry puzzle seems to be bored by it.

We've gotten "out of sync" with feeding times.  One of the first things I do each morning is to set out fresh food and water for Rack.  He ignores it in favor of going out and watering every tree, shrub, rock, and light pole in Wilton Manors.  When we come back, the bowl is still there, ignored.

If I let him to his own devices, he will let the morning food go until after I put the evening food on top.  I have visions of this giant mound of food being picked over by everything but the dog as bits of it get carried off by whatever critters sneak in under the door.  Termites, mosquitoes, Black Racer snakes, you name it.  Just not Rack.

I got a bit fed up with that lately.  For a brief blink, he would tear through the food like a long lost friend and then started turning his nose up at it.  Then I started following him around.  He'd hide behind the big green chair in the corner, so I would put the food bowl on him.  No, not next to him, on him.  Physically.  Resting on his foot.   Meh.  I'm going to ignore you, he would be saying in my mind, and the food would sit.

Later he would move, so I'd follow him with the bowl.   Eventually he'd sniff at it and grab a few pieces of kibble.

When I would go to bed, he would follow, so I'd drop the bowl right in front of the dog bed.  When I turn off the light, that is when he would start eating.  First the layer for dinner, then the layer for breakfast.   Yes, a midnight snack! he would say and munch while I'm trying to get to sleep.

Today I pulled out the big guns.  My homemade plain yogurt.   I put out a measured cup of dog food.  He ignored it and we went for a walk.  I let it sit for a couple hours until hunger drove me from the routine of searching through web pages and into the kitchen with hunger.   Before I was up, I had his attention.  I picked up his bowl and poured an ounce of plain homemade yogurt on top.  He was watching me the entire time, nut brown eyes boring holes into me.

Yes, you greedy mutt, you are getting yogurt.

I padded back into the kitchen and gently went about my own breakfast.  As quietly as I could, walking on egg shells, I prepared my own food.

Fussy dog aside, he's right, I have a good recipe for yogurt, but we shouldn't have to go through this.

But go through this we will.  Tonight when we walk him out to water trees, shrubs, rocks, lamp posts and the like, I will wait until he comes back.   If he hasn't eaten then, he's won.  I'll pour another ounce of plain yogurt onto his food, shrug, and go back to making my own food up.

It's a ritual, not a good one, but sometimes it works for a fussy dog to get what he wants.  Not that I understand it but he's getting what he wants.
Posted by Bill at 10:24 AM