Stuck in traffic again.  Driving in Fort Lauderdale it is bound to happen.

This isn't like the traffic of the Northeast where you can get onto a major road and move a mile in a half hour.  If a person on foot walks faster than your car, it's only for a block or two.

I know not to expect a clear drive to the airport on Federal Highway when I get South of downtown and below the tunnel, it's just not going to happen.

Since there really isn't any public transportation worth mentioning here in the South Florida Sprawl, you're going to take your car.

I don't understand how they thought that putting in a lane that you pay for on the road that you paid for with your fuel taxes and registration fees would be a good idea, then they added insult to injury by removing a traffic lane so that the "Lexus Lanes" would be more likely to be used.   Here in South Florida, that Lexus could easily be too passe and it could better be called a "Lamborghini Lane".  Either way it is bad public policy since you have to have the public transit in place before you restrict traffic.  Typical.  Just typical.

The rule is I-95 is to leave town or for Tourists.  The locals take the surface streets.

Sometimes, when you're feeling particularly daring, you can go home by the beach.  Personally I think driving by the beach is beautiful, but it is going to be slow, and it is somewhat out of the way.  Others will insist that it's faster than taking Federal highway. 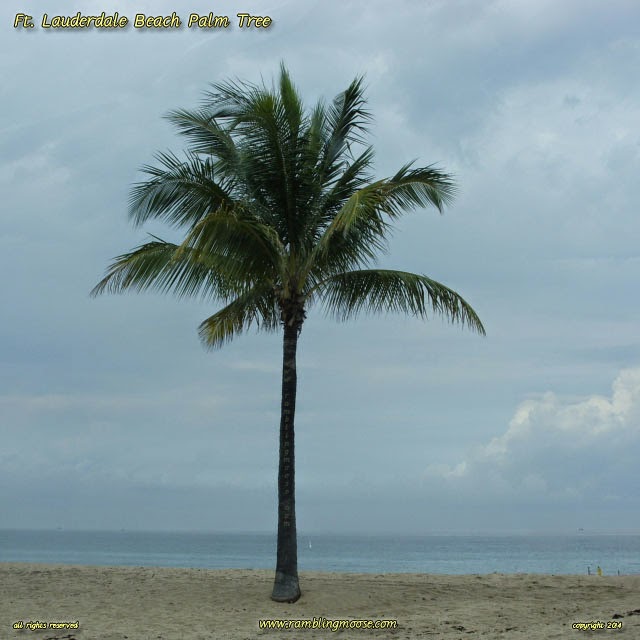 You may be right there, but sitting in traffic for a block or a mile is not my idea of fun.

If I'm not driving, I'll do my best to shut up.

I did have something to keep myself entertained.  I had my camera.

I was taking pictures of all sorts of things that very late afternoon.  Close to sunset on a cloudy day meant that the camera's brain was going to struggle with things like Light Levels and my own motion in the car.  But the tree was there, in a gap between trash cans and volleyball courts, and it needed to pose for its portrait.

Of all those shots of babes and brawns, beach sand and lifeguard stands, this was the best of the lot.  Dark day, camera only went so far.

But it did manage to keep me occupied.  I guess instead of watching content on a TV I'm better off trying to be creative with a camera.
Posted by Bill at 10:00 AM