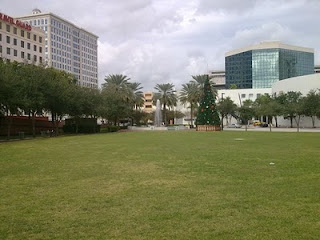 On New Years Day 2010, I and a good friend, Kevin went to the Riverwalk in Fort Lauderdale, Florida for lunch.  Before we got there I managed to take some pictures and will be posting them.  This was the view from the plaza just West of the Andrews Avenue Bridge.  What you're seeing in the middle of the frame is one of many decorated Christmas Trees next to a rather pretty fountain.   It is a typically Florida scene, because you get this fake tree decorated up in a festive way that would fit in well in a Northern city parked right next to a Palm Tree or three.

It is a nice plaza, there are plenty of places to sit and watch the boats on the New River behind me in that picture.   Off to the right, there is a smallish music stage built out of concrete with plenty of Handicap ramps for their ease of access.  This of course means that it is popular with the skateboarders in the area.  It isn't another Love Park, but it still is popular.

This place being right square in the middle of Downtown is a bit of an island of quiet in the middle of the hubbub. It also is a nice place to pass through, linger a bit, then head off to the restaurants on Riverwalk.