The Pot of Gold is in Mt Trashmore 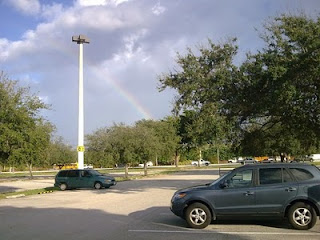 Last month, I was chasing rainbows.

The rainbows seem to have a habit of being just out of reach.  In this case, the rainbow's end was in Mount Trashmore.  Or at least one of the Mount Trashmores we have in South Florida.

The topography of the land here is amazingly flat.   Someone from Indiana or Illinois would feel it's normal.   This area makes South Jersey feel hilly, and North Jersey mountainous.  So as you are driving around anything that sticks up over the tree tops you can see for miles.  This is a big city, despite the fact that each of the urban counties here are broken up into little municipalities bordering a large city in each.  All those people, and Broward County itself has more people than Philadelphia City at 1.7 Million, make a lot of trash.   Since you can't really drop it off at sea like they did back in the bad old days, the solution is to make a giant landfill and keep piling it up.  Behind the trees in the background there is a rather large pile of it.  It is so high that I can spot it from Powerline Road and Prospect Avenue, about 7 miles South of where that picture was taken.   I would guess that the pile is on the order of 50 to 75 feet above ambient elevation.

You should see the flocks of Gulls that circle the place during the afternoon when the thermals get started.  The whole area around there is full of birds, out of proportion with the rest of the area.

I guess the wildlife will adapt within reason to their surroundings.  Hopefully they still will be able to.  Who knew that a rainbow would be a good reason to recycle?
Posted by Bill at 8:00 AM