The View from New Years Lunch 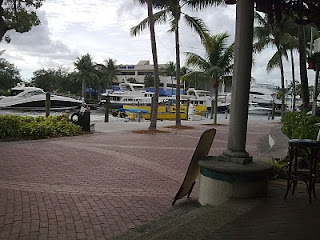 Yes, this was where I had lunch on New Years 2010.  What you're looking at is the Riverwalk and the New River.  The boats there are a fixture there, not an exception.   I'm sitting just West of Andrews Avenue in Fort Lauderdale in a Restaurant called Briny's Pub.  They're an Irish Bar instead of an English Pub, and the distinction is somewhat lost on me.  What I do know is that Briny's Pub has one of the best Fish and Chips platters that I have ever had.  We're not talking about fish sticks and warmed over frozen french fries.  The plate is a large dinner plate with two strips of almost a foot long of batter dipped Cod, a bit of Cole Slaw, and a pile of hot French Fries that is almost as large as the fish itself.   Briny's is a treat for me, with or without my required Guinness on the side.

I sat there having the meal on the First of January, in shorts and a T Shirt, watching the bridge go up and down, and the boats float by.  I wasn't the only person with the idea.  The yellow boat in the background is a water taxi that you can take up and down the intracoastal and see the big houses and yachts parked in a row.  When the Taxi arrived, there were a couple groups that went to Briny's and I think my plate of Fish and Chips was responsible for some of them getting some since it looked so good.
Posted by Bill at 8:00 AM