Have You Ever Had One Of Those Days? 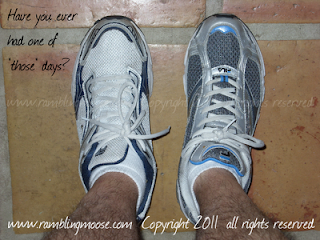 Have you ever had one of those days?

Getting out of bed on Sunday Morning was difficult.  I looked at the clock, early, since neither I nor Mrs Dog had been raptured and sent to our heavenly reward.

Just like the other 7 billion souls on this planet.

I got dressed and took her out for her morning walk around town.  We saw nobody.  It literally was a ghost town.   The city was deserted, and it felt like I was in the middle of one of those Post-Apocalyptic movies that I like to watch.   You know, where everyone is gone due to a zombie apocalypse or a giant tomato from outer space collected people up for some weird spaghetti sauce?

Everything looked normal to me, and that is to say that Wilton Drive was covered with bar flyers from bars that are not in the city, and other businesses that want the people who visit here to go elsewhere.  That always leaves me scratching my head wondering why the City of Wilton Manors doesn't simply fine those businesses that are out of town for littering and charge them an onerous fee for "cleaning, recycling, and manpower time".

Getting back home, I finished my coffee, turned on the music on the iPod, and settled in to do some work.

Time marched on, and I had my second mug of coffee.  You can set your watch by that, it was around 9AM and I needed to finish the breakfast.

Some time around 10AM I had finished the morning routine as it was Sunday Morning.  Morning Routines are what they are and this one felt kind of pointless in a comfortable way.  Getting up out of my chair, I set the laptop aside and looked down and saw what you see in the picture above.

Yes, I had walked all over town with one grey shoe, one white shoe.   Not to worry though, I have another pair just like this one. As problems go, if this is the worst thing that happens to you in the course of the day you're doing quite well.  I'd say it ranks up there with having the waist band of your underwear showing over your belt, although that is acceptable now these days in the "droopy drawers" crowd.

I'll just chalk this one up to "Diversity of Footwear" and say I'm starting a trend.   Maybe I'll do it again some day, but if I do I doubt anyone will notice.   Tolerance can be an amusing thing.
Posted by Bill at 10:47 AM