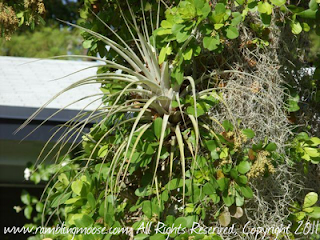 Driving South from Philadelphia, the lay of the land changes and as it changes, so does it's look.

At least that was the explanation.

If you are driving south on I-95, every couple hundred miles or so, things look different, especially if you are driving south on the coldest week of the year, the Second Week of February.  You start off with Snow on the ground, you hit Virginia and the snow melts, North Carolina is thick with Pine Forests.  When you hit South Carolina, it starts to look very Southern indeed.  It is South Carolina that is famous for Spanish Moss.

I would stop to stretch my legs, walk around the rest stop at Lake Marion, and there was one grand tree with Spanish Moss dripping off of its outstretched limbs.  This being February, it would be cold but the Spanish Moss would survive.   I'd scoop up a small bit of the stuff, drape it from the rear view mirror and continue on my way.

The last time I did that, I managed to keep the Spanish Moss alive.  It's mixed in with the moss on the tree in front of my house.  Along with that, we have the other "Air Plants".  There are a couple varieties that grow here, they're all Tillandsia plants, all living off of the biomass that runs down the trees when it rains.

Yes, I'm that crazy person that picks them up and ties them back onto the tree with a "twisty tie" to give them a second chance after a storm knocks them off their perch.

The ones in my tree are mostly smaller ones, but this picture is not of my tree.  This one is a little bit away from my house in one of those nondescript shade trees that are planted to provide a windbreak.  It also must be a native species since it is enrobed in Spanish Moss and Tillandsia.  The larger plants like the one in this picture are rare, and even endangered.  Luckily it took "root" here and has found a home somewhere near the little park.  When you plant native species, you get native species filling in the gaps in the web of life.

In a suburbia that is traditionally a desert of green grass and "pretty flowers" that are typically distantly derived from species from China or other hotbeds of biodiversity, you end up with an area that looks lush but does not function as an ecosystem.   Change your plants to native species and you have the opposite result, wildlife will coexist with you.