A Visit with Uncle Sal at the Airport - Picture 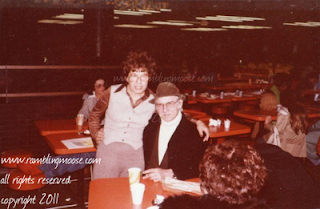 Back in 1977 the French Club took a trip to Paris, Nice and what felt like most of France.   It left out of JFK Airport in New York for one of those trips you will never forget if you have never been overseas.

It was my one and only trip over the ocean to another country.  Sure, I've been to Mexico and had such a fun time I'd like to go back but I think that was more because I was with a good friend, Tim, who showed me around.

When I was a kid we drove to Montreal and took a very cold trip on too small of a "cruise ship" to Gaspe and St Pierre and Miquelon.  The latter was a trip to what the BBC calls the last French Territory In The New World.  Interesting trip, but it convinced me I don't have very good sea legs.

In this case, Mom, Pat, and I spent a few hours sitting at JFK cooling our heels and visiting with My Aunt Betty and Uncle Sal.  That's Betty's head in the foreground talking to Sal and Mom.  Mom and Sal are gone, but the pictures remain. 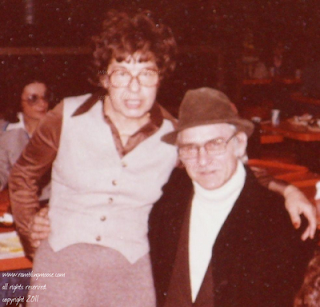 See, they were all great people.  I miss them both.  Betty is up in New York giving orders and being the wonderful woman who will whip up a meal out of leftovers that you couldn't find anywhere else, give you the recipe that you will ask for, and while you're at it have one of the most wonderful conversations you've ever had.

Some of my best memories of childhood were with these three people.  There isn't a day that goes by that I think of them well and fondly.

Hey Sal, love the hat!  That fedora was his trademark back then.  Now the hipsters have taken it over, ironically, but to Sal, it was The Thing To Do.  Somehow I think he'd like it that they are back in fashion.
Posted by Bill at 12:16 PM