A Chevrolet Volt in Fort Lauderdale 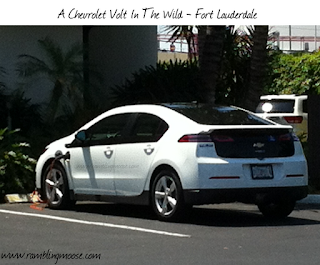 Here is something you don't see everyday and that's really quite a shame in my mind.

It's a Chevrolet Volt, and if you look at the front wheel you'll notice that there is an electric cord plugged into the car.

The Volt is a next generation hybrid car.  It runs off of electric fully until the car is going faster than 70MPH, then the gas motor kicks in and helps it out.  The batteries are what drives the electric motor, and the electric motor is usually being used as a generator.  You can even use the car's motor generator to power your house in an emergency.

Ok, I'll admit it, I'm a car geek.  If I were to get a car, and had money to throw at it, this would be the one.  For just about everyone out there, this car would not have to use gasoline to get around.  You would drive it home at the end of your day, plug it into the wall, and by the morning you'd have a full battery pack to get you where you need to go for a normal commute.   If your batteries ran flat, the gas motor would kick in and get you where you are headed.

If your gas motor never kicked in, you're driving an electric car.  The pollution doesn't go away of course, you've shifted that to the power plant that supplies the electricity to your home or place of business.  If we had solar panels on the roof like we were all promised we'd have by now, that would mean free power and no pollution.  All that takes money, and the infrastructure is not quite there yet, not even in South Florida, but since the United States has the largest Alternative Energy market in the world, we're on our way.

Considering that an electric motor is 90% efficient in producing power where a gasoline motor is at best 50%, GM's claims of getting 90MPG in a traditional sedan is certainly plausible.  Just don't turn on the heater.

Until we get all this straightened out, you can just think about this lucky person who is filling up their gas tank, er Battery Pack, on the office's dime!
Posted by Bill at 10:11 AM