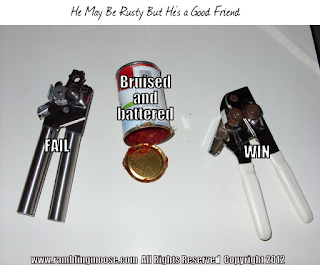 Yes, it failed.  Spectacularly failed.  Like in one of those memes with a big FAIL in white using the "Impact" font.

You see, I'm more than patient when it comes to gadgets of all kinds.  Kitchen Gadgets should work first time, every time.  Simple machines shouldn't test your patience.  They shouldn't make you consider them an act of atrocity against all human kind.  A kitchen gadget should be function over form and not something that laughs at you in a Swedish-Chinese accent.

I'm very good at assembling those flat packed boxes you get at Ikea and other retailers.  Strange faceless figures that are meant to guide you in a cartoonish manner to put together a chair or a coffee table, book case or a computer desk.  All of those items I had successfully built in the past, but this simple appliance of a mechanical can opener called "Koncis" had me stumped.

Being a simple item, I even broke from writing this and tried to use the can opener to open a can of Pineapples in Juice.  Anyone want some?   Oh well, I suspect I'm going to be having them for lunch.

You see, I had tightened the one screw that holds the cutting wheel down as tight as my hands could make it.  The gears don't match.  The cutting blade shined at me as if to say that I wasn't up to the task.

Then I set it down and got out "Rusty" the old can opener.  We've had Rusty for more than a decade.  It works, flawlessly.  In fact when Rusty got rusty, I even oiled it with some rather tasty Extra Virgin Olive Oil and brought him back from the brink of the bin.  Yes, I was just about ready to throw out my old friend Rusty.

Rusty is a good friend, especially in an emergency.  Rusty is a lifesaver.  He will feed you by opening those hard to open cans and give you the treats in side when the power is out.  In South Florida, with the power infrastructure about as stable as a ring of lime green jello out doors on a hot day, it is a Survival Skill to find a friend like Rusty the Can Opener and keep him or her close.

Rusty is such a good friend that his sister lives in the same drawer as he.

When I was back at Ikea, I saw this bin of shiny can openers and they spoke to me. "Vould yew like tew take one of uss home vit yew" I heard in a Swedish Chef Accent.   Mork Mork Mork, it followed up and said "Yew Need Us!".  It came home and we tried it excitedly.  No, sadly, Ikea, your Swedish Perfection and Style hasn't been taught to the Chinese who built this thing.  The Quality of Koncis is nowhere near as good as your Billy Bookshelves or your Husar Desk that I so prize.

So this taunting piece of Koncis kitchen crap is going to have one more duty before it ends up in the recycling bin.  It's going to be a wheel chock before I roll my Jeep over top of it.  I'll giggle derisively as I hear it crunch against the concrete ending its useful life.