Hoisin Chicken in the Crockpot - Recipe 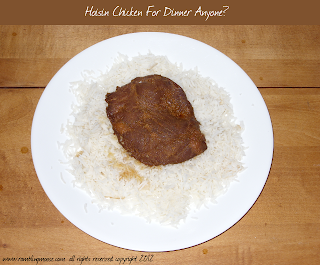 Actually, this is one of those amazingly flexible recipes.  It would work with any sort of mild meat, like chicken, or turkey, it would also work well with Tofu or Quorn if you're looking for a vegan alternative.

I've had Quorn before, it's a bit pricey but kind of tasty and it really does taste like chicken.

A "non cook" would love this kind of recipe as a way to say "Hey look what I did!" and someone more comfortable around the kitchen would enjoy the "day off" because I threw this together in about 5 minutes.

First the recipe as I got it, then I'll tell you my weird tweaks afterwords.  Like any recipe, read it all and decide if it is for you.  You always read a recipe twice!

I did find this recipe online at www.eatathome.com a while back, and I don't have the direct link. I will say it worked, but I'll save the commentary for after...

Put the chicken in the crockpot. Mix the other ingredients together and pour over the chicken. Cook on high for 4-5 hours or low for 7-8 hours.

Hoisin sauce is wonderful stuff.   It's brown, garlicky, and sweet.   If you have a bland piece of meat or sandwich that needs a little sweet and spicy lift, it will do it for you.  I use it on chicken that hasn't been seasoned in a sandwich and love the stuff.   Since it is sweet, if you're watching your weight you have to be careful with the stuff since it is very thick.    Since the sauces were used as a marinade, it was a rather light meal so it would be suitable for diet.  200 calories per Chicken Breast and maybe another 20 or so for the seasoning that got absorbed into the chicken would be my best guess.

I used Frozen Chicken Breasts.  I also put 8 of them in the pot since 4 looked lonely and I had 8 on hand.   I also increased the spice to 1/3 of everything instead of 1/4th.   It turned out fine.

I will say the recipe wasn't as strong as you would be used to if you are having chicken at a Chinese Restaurant.   This is more "Asian Inspired" than an "Asian" recipe.  As a result, I found that it was MUCH better as a chicken breast in a sandwich that it was served on a bed of rice.

This does make a savory recipe, not what I would call spicy.  If you want some heat, add some Chili Paste.

End result was that I have had it a couple times on my own rolls that I make from Pat's Pizza Dough and it turned out quite well.   Just stir every couple hours.

Also, my recommendation is to cook it at "low" heat for 6 to 8 hours until it is at the desired doneness.   My chicken started to come apart at 4 hours and I left it on the heat for 10.  As a result, they were a bit on the dry side.

All in all, it is dead simple to make, and worth another try when I finish the other six chicken breasts.
Posted by Bill at 10:15 AM