When I found a two cycle string trimmer, or weed whacker, on the side of the road on Bulk Trash Day here, I picked it up.  It needed some care, but the fact is that two cycle gas powered equipment is so simple, I wanted to try to repair it.  It now sits in my shed waiting for the next time I need to do some yard work and it works perfectly.

My new-to-me trimmer is a Homelite Trim 'n Edge trimmer, model number UT20004B but the reality is that the vast majority of trimmers are repaired in exactly the same way.  The parts are mostly interchangeable and the only reason why I bothered to write about such a simple repair is that nobody definitively said "Yes You Can Do It".  I did, it was successful, now head out to the shed and find your tools.  A Conglomerate, er, Holding Company bought them up a few years back and now they are owned by the same company that owns Ryobi and a few other well known brands.

Two Cycle motors are getting more rare since the Government mandated that they are not allowed to be produced and sold in the US.  The reason is that you have to add oil to the gasoline to lubricate the parts.  On the other hand, these motors are so tough that they'll be around for a while and you'll be replacing fuel lines, fuel tanks, and primer bulbs. 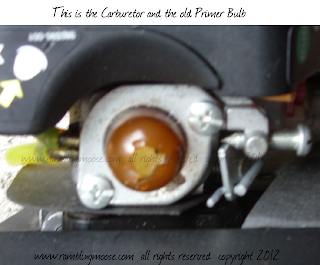 In this picture you see the primer bulb and the top of the carburetor.  Those two #2 Phillips Head screws hold the assembly down.  Remove them and that cracked bulb can be easily removed.  The plate that the screws hold down lifted up easily. 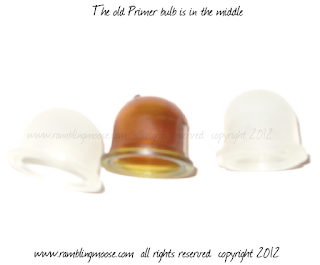 In this picture you see the old and new bulbs.  I picked up a "Variety Pack" at the big box hardware store, but they're fairly common.  The rubber or vinyl does degrade when the fuel mix hits it and after a few years, it will rot away.  The trimmer I have is a 6 year old machine and it took that long.  I'll be going through this again in 2017 if I still have it. 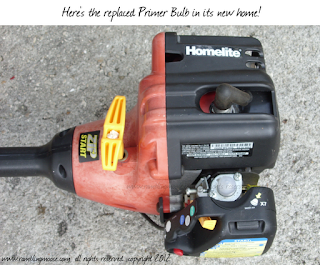 And finally to replace the bulb you put it back in the original position and tighten down the screws.  The entire job took me about 5 minutes to complete.   Seeing that it took me more than that to get to the Lowes on Oakland Park Boulevard in Oakland Park, it really was a non event.
Posted by Bill at 10:18 AM