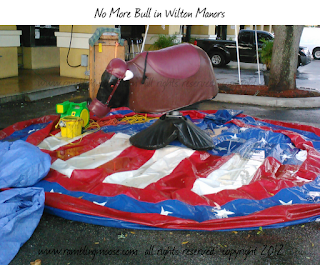 Over the weekend, the Rodeo came to town.  In this case, Wilton Manors hosted the after-parties for the Gay Rodeo that was held down in Davie at the Bergeron fairgrounds.

Every year they hold their festivities, then come on up here and I guess if they're not competing in whatever games that are going on the next day, they come by for a drink.

Thing is that it was a wet weekend here.  It rained each day over the weekend, sometimes quite hard.  So we had fewer cowboys running around in their boots than last year, and less stray cowboy hats sitting around abandoned.  It seems an early start to the wet season.

The bull sat looking deflated, Sunday morning, early.  After all nobody was around to ride the thing at 7 in the morning and it was missing a horn.  Nothing worse than a bull missing a horn.

Later that afternoon, the party warmed up and there were folks out chatting and having a good time, and the bull did get used before being carted away around 9:30 that night.

I guess even cowboys don't like to get all that wet either.  No answer as to whether Pudding was served.
Posted by Bill at 10:00 AM