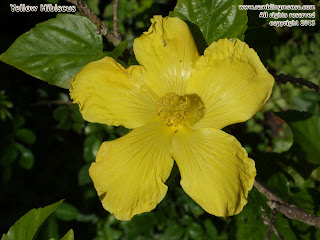 If for no reason other than I think it's a beautiful flower.

I've had Hibiscus plants around me since the mid 1980s.  You can get them to grow in Pennsylvania.  Obviously they have to come indoors for the cold weather, they simply won't tolerate freezing or near-freezing weather.

I had a red hibiscus given to me in the 1980s and it flourished until the late 90s when it got infested with White Fly.  By that time, it had survived a couple cross state line moves, an annual onslaught of Japanese Beetles, and quite a few colder than it would like winters.

The yellow one was a plant that I had gotten right after moving here to Florida.   Hibiscus aren't native here, but they are well loved and showy plants.   This one isn't too happy living in a prison, also known as a fiberglass pot, but it does put out flowers, usually when I need a little beauty.

Some day I'll take it out of its prison, but for now it's a beautiful illustration of the old saying:

Bloom where you are planted.