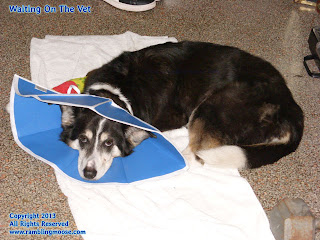 This was the view when I opened the bathroom door this morning after my shower.

This is day 2 of the latest treatment regimen.  She's been to the vet before, and generally doesn't like it.  I can tell that she's not feeling well because she's a very passive dog about it all.

Yesterday's results were very bad.  There's a specific measurement of the "Blood Urea Nitrogen" levels.   It tells you how well the kidneys are functioning.  In my dog, they basically aren't.  I was told "normal" is 34.  Hers was 120.

While that was before any treatment, we do know she's not feeling well and her kidneys aren't working.

What we're doing is taking her to the vet for an IV drip of fluids to see if we can get the numbers down.  She'll have her blood tested mid day today after a day of fluids yesterday and the morning treatment.  At that point we'll see where she is.

Another day at the "Day Spa" for elderly canines.

Chronic Renal Failure is not an easy thing to treat in a dog.  If it were a human, she'd get dialysis or a kidney transplant.   For an almost 13 year old dog, that just isn't going to happen.