Getting The Dog Ready For The Walk 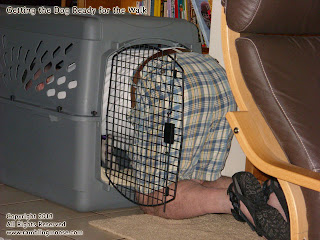 Sometimes it takes two people to move a 36 pound puppy.

Luckily, since they're puppies, they learn quickly.

Ok, let me rephrase this, since he's a Mc Nab Puppy, he learns quickly.  That's the benefit of having a Herding Breed, they are truly smart.

I'm now on Day 7 of Rack, the Shy Puppy.  Amazingly every single day I see improvements.

I was warned that he may panic in the car on the way back.  We were lucky there, he never made a peep.  It was a 250 mile ride back from Deltona with him in a crate and the two of us chattering the whole way.

Over the weekend he handled a ride to the Vet in the back seat of the SUV with him sitting next to me wanting to be petted.  No crate at all, just sitting out in the open.

I was warned he wouldn't be easy to walk.  He's not easy to walk, but he's coming around.  I was used to Lettie who would do just about anything I asked of her, but that was after being blessed with 12 years together.

A week later, walks have become Rack's favorite thing.   He's a puppy, everything is his favorite thing or a source of panic.  He hates noises, so what do I do?   Take him out for a walk on Wilton Drive at Rush Hour.

The point is if you have a fearful puppy, you have to expose him to small doses of the things that give him fear.

It has only been a week.  The first walk he cowered in fear at my neighbor who got down on his knees to pet him.  Last night he rolled onto his side for petting next to that same neighbor's feet.  Rack now will dance a puppy dance and make little happy noises when he sees other dogs all the while trying to wag his tail off.

In one week this shy little creature has learned the map of the Central Area of Wilton Manors and knows where to turn to get home when the walk should be ended.

No, Dad, we don't want to do a third block, Home is THIS WAY!

Sure, the first shelter was most likely a Concentration Camp, but he was lucky enough to end up rescued by The Dog Liberator after a second shelter.  Gisele started the process of rehab, and we're continuing it, even if we have to climb into a crate once in a while.

We only had to do that once.  He doesn't understand that it's easier for him to get his harness on while standing but it's better than going hands and knees inside a large plastic box.

Training a dog is all about understanding what the animal is capable of, what the breed can do, what you can do for it, and applying that knowledge.

We're on the right track.  Happy squeaks and puppy prancing shows the progress.

For a highly noise sensitive dog to be able to handle the 7AM disgorging of the Fort Lauderdale High School Buses as they parade up the drive to NE 6th Avenue's light at the same time as E-16 and R-16 come blazing out of the fire hall with lights flashing and sirens doing a "MERRRP" at some idiot in a minivan who didn't make way, shows progress.

One walk at a time.

Sometimes the walk requires a rather undignified start, and sometimes it's just "Up!  Walk!".