If you are reading this blog for information on Chronic Renal Failure in Dogs, you will want to search for that tag here.   I've documented the last two years of my dog, Lettie's life.  All the mistakes, all the trials, and all the triumphs in combating the disease.   I've been told I did better than most, a year past the formal diagnosis, three months of syringe feeding, and so forth. 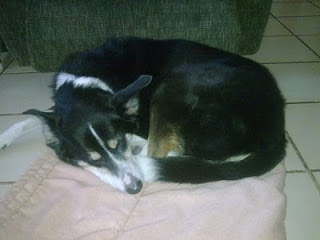 Yesterday I made hard decisions.

We all think they were the right ones.

What made it final for me was the feeding session yesterday morning.

I've been syringe feeding my dog, Lettie for the last three months.  I had a visit with the vet the night before, Wednesday.  The vet expressed shock that I had been feeding her with a syringe for that long.

Her reputation was that she needed "Caution".  She's fear motivated first, so if you scare her she will show you teeth.  And by "you" I mean, Me.   I've gotten growled and snapped at, and sometimes she even connected.  It's fear.

Take one extremely intelligent dog and surrender her at 6 months to a shelter.

Six months later at her first birthday she gets out and lives with me the rest of her life.

Sure, she's going to be fearful.

The vet said we'll have a longer life expectancy if we shift over from the prescribed "I/D" diet for Pancreatitis, to "K/D" for Kidney Disease.

He didn't realize that there isn't a dog on the planet that likes "K/D" food.   The consistency is like modeling clay, play doh specifically.   She fought me every syringe.

In fact, yesterday morning, when I went to feed her, it took me 20 minutes to get one syringe in her.

I realized after 40 minutes that she had given up, and now it was time for me to as well.

I had a discussion with Kevin about this, and initially he said that he thought maybe we might...

But he came around too.  It didn't take much discussion really, maybe a sentence or three.

The 20 minutes a syringe was the clincher.   You see the first time I fed her that K/D food, she rejected it completely.  Pump a small bit of about 1/2 Tablespoon into the side of her mouth behind the canine tooth and wait.

I didn't have to wait long, she immediately spit it out.

It was a grey brown blob sitting on my foot.

I kept after the entire syringe and reloaded those blobs that were all rejected and I realized that I just spent 5 minutes feeding a dog who completely rejected 100 percent of the syringe.

I had the time after all, but it was almost the same story.   She only kept in about 5 percent this time.  This was on Cerenia, a powerful Anti-Nausea drug that you are only supposed to keep her on for 4 days.  She was on Day 7 of this.

Eventually after 40 minutes and 2 syringes I quit.  She should get 10 syringes a day plus a lot of snacks.

I was due for a vet visit later, and that gave me time to think about it.   The catheter in her leg had to come out.

When I got to the office I had decided that we should cease all treatment, and only provide Hospice Care.   Make her comfortable and see how it goes.

While waiting to tell the vet this, I weighed her.  She was down another .8 pounds.

.8 pounds is not shocking except that this was in One Day.

In short, She was telling me "It's Time" and I had to stop being stubborn.   It isn't helping her.

We spent an hour at the vet, and everyone came to me and told me that we were doing right by her.

Armed with some "A/D" food for "Anorexic Dogs", three tissues to help me from tearing up, and minus one leg catheter I went on my way.   With plenty of goodbyes, and eyes teared, we got in the Jeep and went home.

Lunch with Lettie was different.   All the rules are off.  It's like giving Grandpa that one last slab of Death By Chocolate when he's in the hospice and has diabetes.

I was grilling chicken and she was getting some.  Never mind that the salt would mess with her system from this frozen chicken breast, she wanted it.

In fact, I'm glad I grilled four because she had 1 and 1/2 of them immediately, and another 1/2 at dinner time.

Real Food makes one feel better even if it is bad for your long term survival.

This morning, syringe feeding the A/D food took me under 10 minutes.   An entire can went into her in that time.

She looked at me confused when I told her "We're Done".   The battle was over and she was expecting more fight.

So you see, she realized it too.  She stepped forward and put her head down and gently on my chest.  Whether it is to show acceptance or thank you I don't know.

The Final Appointment for that trip across the Rainbow Bridge is scheduled for Wednesday 1PM April 10th, 2013.

We wanted one last week to enjoy each other.  Eat bad food.  Bark at the plastic duck in the pool.  Sniff the Lemons on the tree.