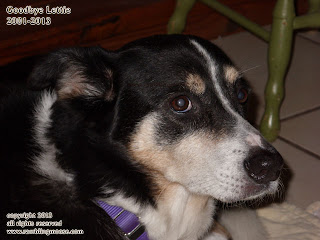 She came into our lives November 30, 2002.  A year and a half old, she spent the year before in a shelter, and six months before that with her first family.

She had escaped or had been abandoned in the North Dauphin, PA area around that time.

Lettie is named after the Animal Control officer that saw her potential and took her to the No Kill Shelter that I found her at.  Thank you Paulette, I am forever in your debt as a result.

She has been with us for the last 10 plus years and now it is time to say goodbye.

She went from being terrified of other dogs to being one of the most well behaved, if not a bit wary,  dogs that I have ever had the privilege to know.

After having the thyroid problems for 2 years, and the chronic renal failure for around one, including 3 months of twice daily feeding via syringe, it's time to end her suffering.

At 1pm today, I have an appointment to lead her "Across the Rainbow Bridge".