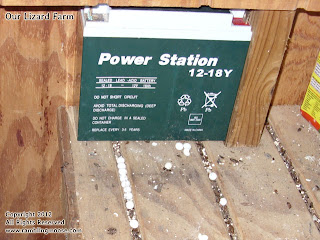 Part of having a puppy, especially a shy or fearful one is getting them used to everything that life will throw at them.

In my case, while I have an almost blank slate, I also have a dog that is afraid of pretty much anything.  That is to say, at least he is afraid of anything that makes noise.

I did manage to get him outside after his panicking at the big evil scary sliding back door that made a racket on its tracks.  Once his nose is out the door, Rack seemed to take the yard in style.  It gave me an excuse to let him sniff around and do a little weeding.

This is South Florida after all.  Blink and your yard has new growth.  Blink again and the weeds are putting out a cheery carpet of white and yellow flowers, shamrocks with their lavender blooms, and plants that people in colder climates keep in their homes and offices.

Yes, I have philodendron growing in my back yard as weeds, don't you?

Wandering around the yard, I was accompanied by my little black and white dog.  Picking up weeds as I go, pulling vines, and generally having little effect, I realized that I needed to get into the shed for the nippers.  The Bougainvillea was growing again after having been beaten back and it threatened to grow its tendrils into the spa.  Magenta flowers are beautiful, but you do need to get past that wall of blooms to get anywhere in the yard.

Opening the door to the shed, there was just enough noise to make Rack back off and assume his sitting position.  He does that when he's overwhelmed, whether he's in the back yard or in the middle of an intersection.  Definitely something to work on, at least he's not barking at whatever is scaring him.

We had taken Lettie's old crate out of the shed and given it to the animal themed thrift store.   It created a big hole that the detritus of life hadn't filled in yet, so I was able to step inside and see an area of the shed that was invisible before.

Meaning to clean the shed out but realizing that there are always more pressing things to do when you own a house, I noticed that there was a row of little pearls on my workbench.

Those pearls each contained a developing lizard.

Since I get so much entertainment watching these little creatures go about their reptilian lives, I left the row alone with a smile.

Just so long as there aren't beady little eyes watching me in the spa from the utility easement at the back of the yard, I'm OK with it.  This is because when I'm in the spa I'm not dressed for guests!