A Security Camera View On The World 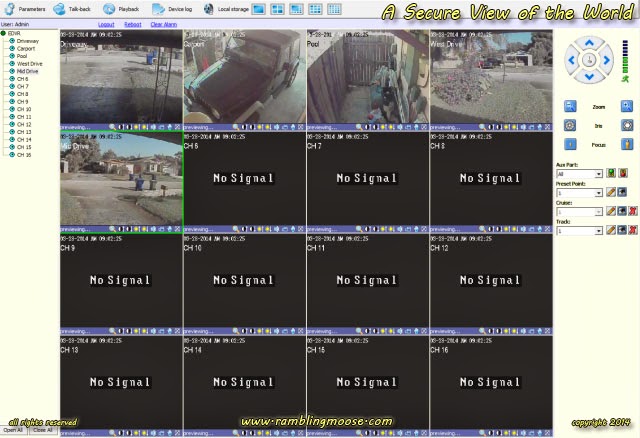 When we're home, I have video to look at.

What you see here is my view on the world.  I have another three cameras to place, and we already know where they will go.

It started with me getting "A Deal" on a security camera set up.   It came with no hard drive, so once we got one of those, dropped it in the machine with a cable and four screws, we were on our way.  Not too shabby for $150 US.  It came with eight cameras and a bunch of wires, mounts, and power bricks.

Low price to live on the set of The Truman Show.  No, I will not allow cameras inside the house.  That's just Beyond The Pale.

The machine is self maintaining, so none of the usual "Operating System Twiddling" that everyone was used to.  There is a whole world of terminology to learn.  I had done all this before.   I "Specified, Procured, and Deployed" two of these same units at the mall that I was the IT Director for.

The hardest part of setting the second one of these up is running wires in uncomfortable places.

The hardest part of setting up the first is learning all the terminology.

Things like "TVL", IR, and PTZ become second nature after a while.

You have to know that the more TVL you have, the better the picture.  TVL being TV Lines, which is just how "HD" your HDTV Picture would be.  These cameras are only 640 lines so they're below HDTV spec, around the same as your old square Standard Def TV used to be.

IR is Infrared.  In this case, each camera has a ring of 28 infrared LEDs around the lens.  They glow red at night, and some may not even be able to see that frequency due to color blindedness.  In my case, they're quite bright and give me a view on the world of everything that goes on at night.

PTZ is something I truly want simply for the flexibility and the Coolness Factor.  Stands for "Point, Tilt, Zoom" and it's something you need to be able to do even if you never get a camera that will support it.  It will allow an operator, you or me, to Point or Tilt the camera at something, and then Zoom in on it.

Just like any technology, there is a world of jargon to fool the outsiders.

Add to it that the Chinese who wrote the manual wrote it in crystal clear "Engrish".  Which is to say there was a passing acquaintance with the rules of English Grammar.   They passed the rules when they were on the bus in the town center.  They were in the book store they rode past at 50KPH.  They didn't read the rules, but the book was there.

So you have to step back and read between the lines.  The documentation is there, and you just may be able to figure it all out.  Once you do you can twiddle and I have a stack of settings that I can twiddle with.  Getting all that set just so is the goal.  Motion Detection should be just enough that you're not looking at 8 hours of uninterrupted video every night.  The IR light should not be reflecting against the eaves of the house so you're looking at solid grey video.   There is a screen where I can block off certain areas of the screen from Motion Detection at all meaning if something happens in the upper third or the neighbor's house, I don't care.  I can tell it not to record during certain hours which I'm trying to figure a reason that would be helpful.

All that is really quite involved.  Just like anything it's the sum of the parts.  A lot of little parts make a system.

Unfortunately, the software has limits.  The web interface only runs on Internet Explorer which runs like molasses on my i7 laptop, and like crap everywhere else.  The query function is creaky.  I could write some serious improvements to the system if I had "root access" to the operating system but even that isn't available.  The help messages are written badly, more of that Engrish.

That's one very strong reason why this sort of thing should be open.  Chinese Software is horrid.  Give me a LAMP server and let me write my own PHP code or Java.

But it does work, after a fashion, and it is open enough that third party software will work with it - if you are brave enough to try to get it to.

So if you're coming down the block, wave hello to the camera.  I'm sure I'll get to watch it on the DVR.
Posted by Bill at 9:44 AM