Being That Kid, the one who gets into things, can cause problems.

Some kids were destructive.  They grew up to do things like be demolition experts or construction engineers.  You know the kind, they'd love to break things just to see how it worked.

In my case, I used to break things to fix them.  Sure, I loved to see how they worked, but I'd get things people would stop using because there was a minor problem and then repair them and say "There, better than new because it has a history".

Ok, maybe I wasn't THAT well thought out as a wee brat, but you get the picture.

I would fix my things, things around the house, and neighbors stuff.   Kept me busy and kept me from being bored.  I was the kid who rebuilt a switch on a radio that popped open once when I went to New York City to visit my Aunt Betty and Uncle Sal.  Those old "Double Pole, Double Throw slide switches" didn't always hold together as well as they should.

My sister has a strong memory of my bedroom being crammed full of electronic "projects" in various states of repair and disrepair stacked chock-a-block in every cranny I could make.   Add to it the potted plants in the windows and the big fish tank, and that bedroom was a very full room over the garage.  If I had the storage for the stuff, it would have made this hobby a lot more manageable, but it wasn't to be.

One day a new project appeared.   Dad brought in his 8-track player.  He had it in his big Buick Limited that eventually became my car once he passed on.   The player was his pride and joy, and when we'd go down to Glassboro for a Saturday Night Out with Ann-Ann and Uncle Frank, he would slap in some of His Music and we'd go down The 295 to Delsea Drive in style. 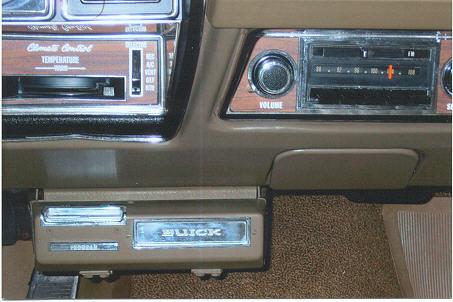 This was where I got my love of Glenn Miller, The Dorseys, and The Andrews Sisters to this day.

We stopped listening to His Music after a while and I never really put it together why.  We'd find something else, Middle of the Road music, most likely and glide down on our visits.

That 8-track player appeared in the house with a warning to me:  Don't Touch That Player!

Being the curious pre-teen that I was, we all knew that wouldn't work.

The player sat there in its yellow/beige plastic housing with Buick on the faceplate staring at me.  For a while it taunted me until I took the time to find the dreaded Phillips Screwdriver.   It was going to be looked at.  Time to take it apart.

I got the plastic housing apart, then the metal case came off in short order.  Metal Case?  Remember those?

Looking inside of the unit it was very obvious what was wrong.  The unit had thrown its belt and it was no longer attached to the motor.  That belt would move the tape around inside the cartridge and make everything work.  I tightened the screws on the motor so that things sat where they should, then stretched the belt taught.  Sealing things up I put it all back together.

The conversation went back and forth and eventually he calmed down and we took it out to the beast of a car sitting in the driveway.  Plugging it back into the weird connectors that the car had for this purpose, the 8-Track was now plugged in.

Success.  The Time-Life Swing Era Collection for 1936 came to life with the Toy Trumpet song joyfully playing on the South Jersey Prairies.

I got a strange look that I now know as "Kid, back off, this is my toy, you could have broken it once and for all".

"Thanks, Bill, we'll have music now!"

Feeling proud, I handed him the little piles of sheet metal screws and the #2 Phillips screwdriver and we replaced the unit in the car.

To the day that we finally got rid of the car, that 8-track sat there with Pride of Place.  Every time I would get in the car and knock my right shin on it, I'd remember the day we put it back in the car.