Giving Me The Bird 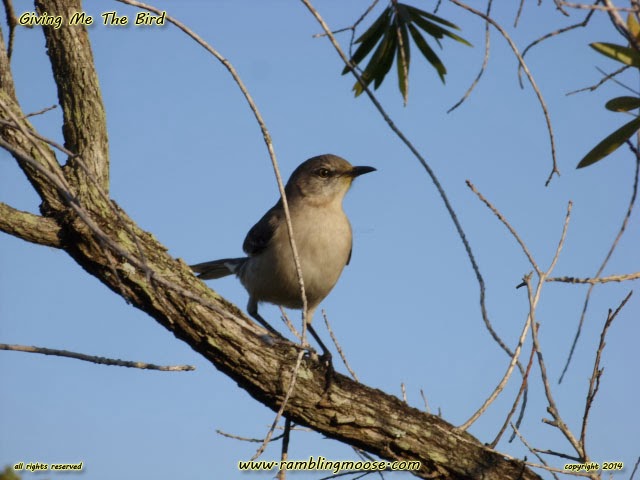 Have you ever felt you were being watched?

Going out into the yard to do a little puttering, I got visited.

I have a half dead bottle brush tree out there.   After every storm, I check the thing.  I'm hoping that the dead pieces can be removed and it's hanging on for dear life.   If I can cut off the dead, then the Termites won't have something to eat so close to my house.

Unfortunately, nothing ever really falls off that "old snag" of a tree.  The flowers that look like a bottle brush keep blooming, and the green parts are staying green.

I should be happy about that except I planted a cluster of screw palms on each side of it, and a real palm tree in front.  The 'island' it is on in the yard is a bit crowded, and I'm waiting for it to be cut down safely. 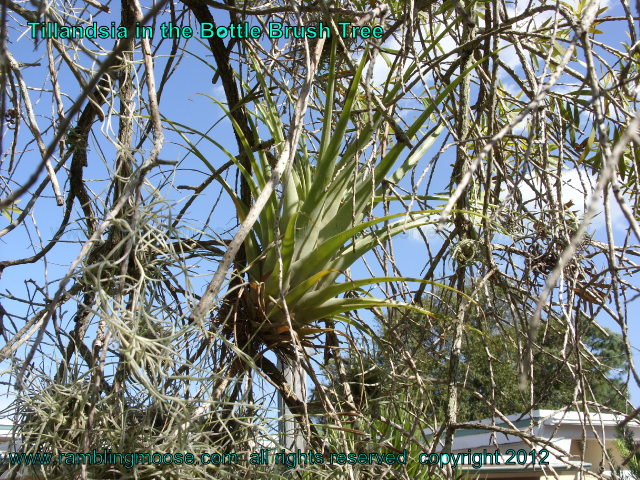 I am not rushing matters because there is a spectacular "air plant" in it.  They only grow when trees are shedding nutrients, so that means that either it's the "right" kind of tree, or the tree it is growing on is dying.  The air plant is about the size of a watermelon or a small kick ball, so I really don't want to disturb it.

Rooting around the yard, I heard some chattering above my head.   I was trying to get a picture of the bottle brush flowers, and I have those, but this was more insistent.

This little bird was arguing with me about my right to be in the yard.

I don't go out there often because I don't like to feed my other pets.  The clouds of Mosquitoes that have claimed the yard have also used me for feed more than once.  My pets.  Would you like them?  I didn't think so.  Blasted Tiger Mosquitoes...

The bird actually flew in frame.  One second it was just ... there!

So I did what any Red-Blooded photographer would do.  I took a purty picture.  Actually I took THIS picture and realized there was a twig in front of the bird.  I would be able to photoshop it out, but since I doubt anyone would do more than look at it in passing, I thought I'd just post it here.

The bird flew off as soon as it realized I wasn't going to annoy the other bird in the tree.  I guess it was a bonded pair, or at least it seemed that way to me.
Posted by Bill at 9:57 AM