Rack Will Wear Me Out First 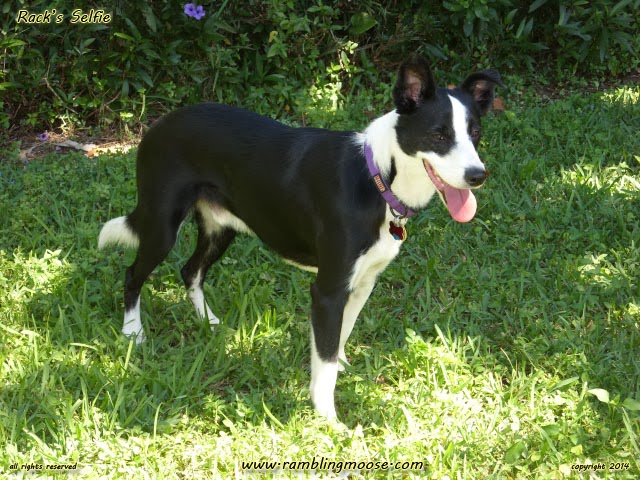 At this moment, it's a cool morning.  I have the windows open and I'm lying to the dog.

You see, anything scary I tell him it's Kirby or Kirby's.

Rack loves Kirby, our neighbor across the street and over one.  We're not sure, it's probably because Kirby acts the most excited of all of our neighbors when he sees the little guy.

On the other hand, it really is Kirby's truck that's roaring past.  A big black diesel Ford F250 extended cab that will shake your fillings loose when he kicks in the turbo and rolls past the house.

I've got to borrow that thing next trip to Ikea, even if that is a stereotype.  Hey dude, can I borrow your truck?

The day started on a similar bend.  Me handling the dog.

I get up, get him ready, we walk.  He refuses to eat before we go, so I guess he really does have to go.

Peering through the half moon above my door is normal for me.  I want to make sure that I don't have a black and white dart charging out to greet anyone.  On the other hand, if he didn't think anyone is out there, Rack simply doesn't act up.

I open the door and leave it open to walk to the mailbox regularly without a care.

This morning, I must have been half asleep.

Open the door and step out into the cool predawn.  I spot them a half second after Rack does.  That's because my right arm is now being yanked by 45 pounds of dog jumping into the air five feet alternating with him going back into a sitting position and dusting the asphalt of my driveway.

Spring-sit-spring-sit.  What a weird critter.

There is a neighbor from a block or three over who has his little white dogs with him.  A pair of havanese or maltese or bedroom slipper dogs acting excited to see my goofball.

Belatedly, I pull it together and manage the situation.  Not too well, but I manage.  Besides, they like it too.

We're playing Leash Macrame at 5:55 in the morning in front of the house.

It's a brief explosion of canine energy followed by my grabbing the purple harness and unthreading him from the other two leashes.  Silly mutt.

We wander off and before we get home, he manages to find another pair of dogs and we go through the same ritual.

Getting home, I now have a black and white door stop in the middle of my kitchen.   He's had his food, now he wants mine.   "Not For Dogs" isn't having its effect so we go into the stare down posture.  Six inches from a wet black nose, I repeat myself.  Instant avoidance, he wanders off a few feet until the kettle boils.

I have to reach over him to get the water for coffee and later tea.

When I get the ice out of the freezer, he's back under foot.   What is it with dogs and ice cubes?

I give him the ice cube and am able to put a dent into my breakfast.  "Rack, Out back?" gives me another 90 seconds before he realizes that he may be able to get something out of me before I finish the white plain yogurt with banana slices.

"Not For Dogs" isn't really working for that either.

We settle in after I "stiff" him a snack.  My arm is now a new dog toy.  I'm covered in slobber and nibbles.   Handed The Rope, he's chewing it on the wrong end.  I guess he really wants me to give it to him.  Upside down on his back he's chewing on a multicolored cotton rope and reminding me that when I vacuumed yesterday I didn't get under the big chair when his tail begins to dust the supports for the thing.  Oh well, he put wet footprints all over the living room so we are even.

Floors don't stay clean here for long.  He's got really bad aim.  Colossally bad aim when he's watering a tree.  He's a rare breed of yellow footed collie called a Mc Nab Dog.  The foot wash station on the front porch and lap around the yard to wipe the water off is routine now.  Some day he'll learn.

It's all a part of having a rescue.  A dog that comes to you partially trained may have deep secrets that will bubble to the surface in quirks.  It's always entertaining.  What was new yesterday is old hat today.  Sounds like a certain kid I watched grow up.

While they can't speak they certainly can be heard.  Would you want it any other way?  I know I wouldn't.