Replacing the Heatsink Fan in a Thinkpad T60

I have an old workhorse of a laptop that had a fan go bad on the heatsink.  It sounded like someone was rolling a plastic jar down a table with a marble in it.  We replaced the machine, but I didn't want to throw this one out.  I kept it for "parts" but kept it running.

Finally one day I decided to try one last time to find a cheap heatsink or fan for the old machine.  Instead of throwing out a machine that worked, I was able to replace the fan for $7 from a vendor on Amazon.  It took three weeks to get here from Shenzhen in China, but after about 15 minutes of work, I now have a perfectly good computer.

The fan works like a champ, and now the computer breathes instead of rattles.

Remember, this is more than a basic repair to your computer.  Your mileage may vary - it is completely possible to have an accident that will render your computer unable to be used.  In otherwords, you can break your computer if you aren't careful so you are following these instructions at your own risk.  There are guides online at the website at Lenovo that will also help you.   A search for "T60 Repair Manual" found me this guide that I distilled to make these notes.  Please be careful, this is something that pretty much anyone can do it they take their time, but I have seen people kill their computer because they weren't careful.

To replace the fan, you have to remove the keyboard and loosen the back.  I have had this machine apart a number of times, so I may have misplaced a few screws.  Yes, go ahead, I do have a screw loose.  Why else would I write a blog for four years?

Make certain you have a clean work area and have discharged your static electricity since that could kill your computer.  Remove the laptop battery and power cord from the back of your T60.

The picture below shows the location of the screws circled in Yellow.
Well, strictly speaking, they are "O"ed since Photoshop wasn't behaving.  18 point Transport font of a Capital Letter O worked fine.

Look for the icon on the back of your machine that looks like a Keyboard.   There are five screws to remove.   Set them aside for the eventual reassembly of your machine. 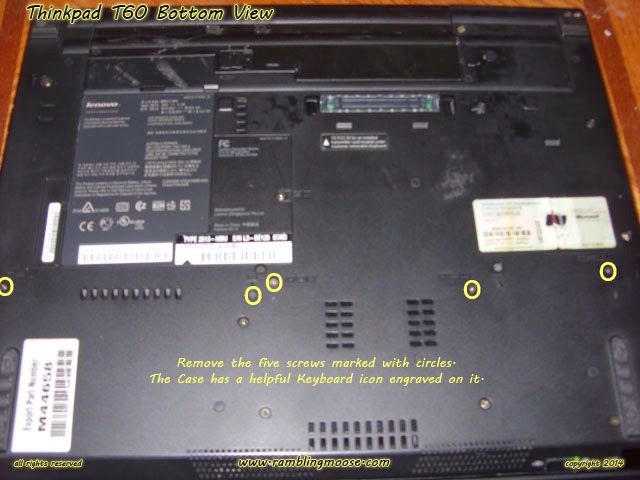 Second, remove the keyboard.   It should lift right up, however, there is a thin ribbon cable underneath it connecting it to the motherboard.  As you can see in the next pictures, I simply set it back on top of the computer.  Depending on how brave you are, you can do either. 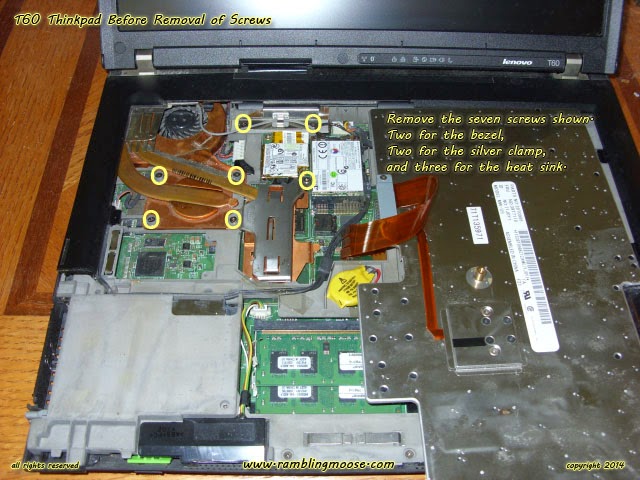 Remember that there will be a wire for the old fan that needs to be removed from the motherboard.  Make a note of where it goes and how the plug goes back onto the motherboard for later.

When all the pieces have been gently removed, your laptop will look like this picture. 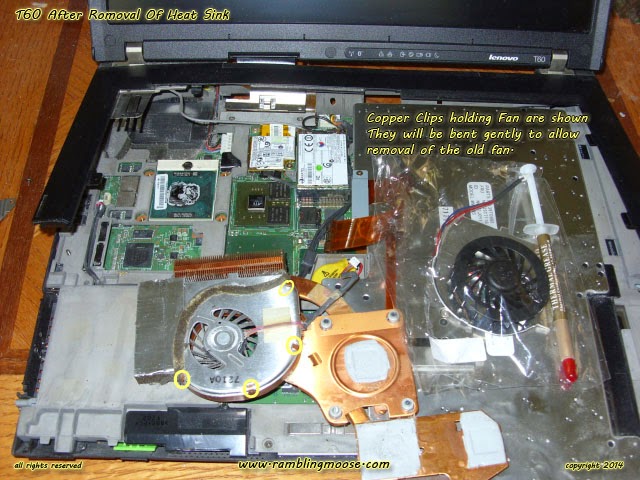 At this point, your machine has been disassembled.  You now need to bend vertical the copper clips holding the fan to the heat sink so that the old fan may be removed.  Do so gently, but firmly.  You need the copper clips to be intact to attach the new fan, so don't break the things!

The fan will be held in place with a piece of tape, in the case of my machine, Aluminium tape.  It will also have the wire held in place with a clip.  Gently remove the wire from the clip on the heat sink.   Bend the fan out of the way so that the tape is holding the fan.  If the fan does not lift up from the heat sink easily, check to make sure the clips are all bent away from the old fan.  I removed the fan from the tape - you will need that tape so that air flow will be maintained.

To mount your new fan, place it in the same spot as the old fan.  Attach the tape to the fan to hold it in place, then bend the copper clips in place as the picture above shows.

The replacement of the heat sink goes as follows:

I cleaned off the three contact points on the motherboard - The CPU, Video Chip, and the third contact point (what ever the thing was!).

I lifted the bezel and connected the wires for the fan to the motherboard.

I slid the heat sink assembly back in place.

Screwed down the heatsink, then the silver clip, then the bezel with the screws that I removed before.

Then I flipped the machine over and replaced all the five screws that I removed at the beginning of this exercise.

At this point you may replace the power cord and battery to the computer.

I was able to power on the machine and it came back up.  Allow the machine to come to operating temperature and you will hear the fan the entire time if you place your ear next to the heat sink vents.

If you forgot to connect your fan to the motherboard, the T60 will beep at you and display "FAN ERROR" on the screen, then immediately shut off.

In my case, I was able to use the machine immediately and allow the machine to out and update the operating system while playing a few games and surfing pages.  My old machine was fully functional again!
Posted by Bill at 10:31 AM