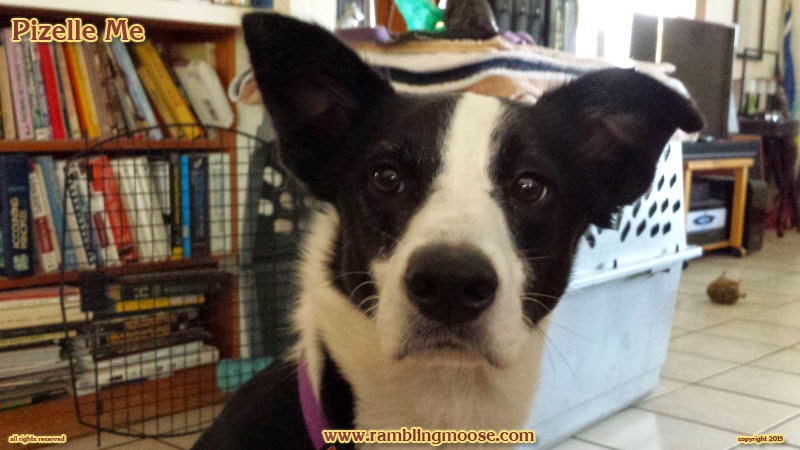 Actually, it's not so bad, and yes, I am overreacting.  It's a sign that my fearful McNab Dog, Rack is growing.

When I got the little guy, he was only 7 months old, totally fearful, and completely overwhelmed.

Shelter dogs don't understand why they were abandoned, and when you take one of the Number One Smartest Dog Breeds out there, rip them away from their family, and dump them in a concrete pen with other dogs, they shut down and develop emotional problems.

The dogs that curl up in the corners are the ones that end up getting put down more than many others because most people are lazy and won't take the chance on a dog that just can't manage greeting them other than curling up in a ball in the corner and shivering.

We're good with that.  Actually, my Lettie was fearful too, in her own Alpha Dog way.  We know how to manage that, and realize that with time, you can turn a Fearful Dog into a Dog of a Lifetime.  Lettie was, Rack will be.

Rack is getting close already.

His personality is opening up a little more each day, just like that prized flower in the garden that you wait for all year to open up.

He's showing his needs in his own way.  His way is staring a hole through me.  With twin brown eyes that are laser beams.

Now, Rack has his problems.   He is missing what the vet called a "Pre-Molar".  A tooth.  So with all the fear he went through, and the trauma of being moved from the area around Rome, GA to Deltona, FL to the excellent Dog Liberator's shelter, he has to go through pain.  I was feeding him a specific Dry Food Diet because he can't digest grains.  The dry food gets mixed 1 cup to 2 ounces of boiling water and soaked.

Grains will turn his butt in to a chocolate soft serve custard dispenser, as someone near and dear to me calls it.

Chicken and other poultry is off the menu for the same reason, which is a shame, because when I am not making "Asian Inspired" Pepper Steaks and other things, I cook a lot of chicken.

I have to watch other more basic foods.  He can't have those common bone shaped cookies everyone likes, they're simply too hard.  His treats are all soft.

Too bad, because he's starting to beg.

Most people would hate that, but I'm seeing it as Rack asserting his own wants and needs and doing it in a social way.  I'll tone it down, and if I say "Not For Dogs", he understands he's not getting any and goes away to do dog things in a dog way without any fuss.

I'm the Alpha, after all.  The Pack Leader.  The one who walks him 3 miles a day and taught him if the leash gets dropped, circle back immediately and wait for instructions.

I'm athletic and live an active lifestyle as a result.  I snack a lot.  I'm tall, so it takes a lot of calories to "Maintain Weight".

I also tend to sit in a low chair, an Ikea Poang, for too many hours a day and do my thing with the computer.  It's low.  When he walks over his back is higher than the arm of the chair.

Sitting down after doing some computer work, I needed a snack.  I grabbed three Pizelles.  Those Italian snowflake cookies that are hard and round.   They're made in a press, and end up being rather firm.  Not really Rack Friendly Food since they're also made with a lot of All Purpose Flour.  Wheat.

I tried explaining this to the Faithful Sidekick.  I really did.  It didn't work.   Pizelle number one went down leaving an after taste of Anise on my lips.  Great cookies, and we make them at home.  There are always a few in the freezer here.  There are only a few left.   We should make more.

I told that to Rack as I was having brown eyes bore holes through me as I finished Pizelle number two with that last dog sized morsel going into my mouth.

Yum.  They're great.  The chocolate ones are much lighter and my favorite, but the Anise ones are good too now that we worked out to double the amount of seeds dropped in the recipe.

I said that as I was squaring off the Pizelle and eating it into shapes.

Rack didn't care, he just wanted to taste that damn cookie.  "After all it looks like those weird things you cram in the Kong, Give It To Me."

Or so I thought he said.  I bit off more of the last Pizelle turning it into a palm sized triangle.

It's Wheat, You can't have Wheat and you know it!

*sigh*  Nibbled it back into a rectangle.

He didn't care.  He must like the smell of Anise Seeds.  I'm hearing from the Kitchen "Don't give him that, he'll just get sick"

I handed Rack his prize.  A Thumbnail sized bit of Pizelle.   I'm such a soft touch.  "They really are that good", Rack thought as he trotted away, crunching the cookie against his missing Pre-Molar.

The things Dogs will do for Forbidden Foods!
Posted by Bill at 9:40 AM