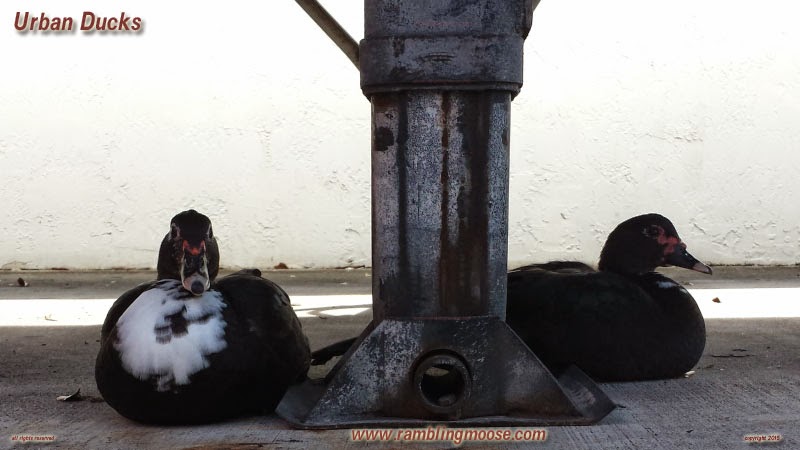 I'm used to seeing these creatures everywhere that there is water nearby.  Since this is South Florida, that's pretty much everywhere.

They do tend to stretch the definition at times.  If there is a shower that creates a puddle, and they need it, you have a couple tough old birds flapping around in it and enjoying themselves.

I have used my dog, Rack, the McNab Superdog to herd them before.  Out on the walk, these Muscovy Ducks would be in the middle of the street doing whatever ducks will do, which is practically nothing.

Square in the middle of the street.  Blocking traffic.

Since Rack needs a little socialization time, and that is truly broadly termed, I usually help traffic.  I think the ducks are more afraid of me than my dog because my dog tends not to really care and merely follows my lead.   I walk closer to the ducks and eventually Rack comes along.  The ducks don't care for that so they waddle off away from me.  It is like putting like poles of the magnets together, I am not trying to scare them, they wander away.

In this case, I was sitting in the car looking for things to occupy myself.   We went shopping the other day for a TV for an office.  It's not like there needs to be a TV in a car other than to get it home.  Or work.  Or wherever it is going.  We're perfectly capable of entertaining ourselves without watching TV in a car.  After all, there are other toys.  The Radio.  The Phone.  Making faces at the other cars on the road.  Having a conversation.  Pulling on an imaginary chain and hoping that the trucker will blow his horn.

Do they still do that?  Is it a thing?  I remember getting a trucker to blow his horn once.  Just once when I was a kid.

Near the store, adjacent to the property was a small pond.  Large enough to show on the map, small enough not to have a name.  No fountain in it.  It's South Florida.  If you have a pond you will have fish.  You will have wading birds.  You may have a fountain.  Who knows why, it pleased someone.   You may even have an alligator.

Yes, there's water, don't go in, you may get eaten.

But the ducks seem to know what is going, whether there is a gator or not, where to find what they need, and if something comes too close like an errant herding dog and its owner, they'll wander off.

Being ducks, they'll find shelter eventually in places you don't expect them.  They may even entertain you simply by being there.

Like this time.  I watched the TV get removed from its box, inspected, gingerly slid back in.  It was then hoisted on the shoulder and brought back to the car.  After sitting in the car for 10 minutes, I decided I needed a picture.  Why not, after all it's not every day you see ducks sitting under a parked Semi truck.

I guess since I didn't move too quickly they didn't care.  Being an annoying photographer, I eventually got too close.  They're too mellow to care too much but one of them stood up and moved off a whole six inches or so.

Doesn't matter.  I entertained myself, got the picture, we got the TV, and went on our way while the ducks settled back down in pretty much the same position they were in when I got there.
Posted by Bill at 9:10 AM