The 6AM Gecko Hunt

We were out for a walk that morning.  The sun hadn't yet risen completely and the morning clouds were lit a brilliant red from below.

I was standing at the foot of the drive looking at the spectacle when I began to be pulled toward the front door by Mrs Dog.  Half asleep, not having had the first of my coffee, I was surprised at her insistence.  Something was amiss and we had to get to that front porch and do it quickly.

By the time I had rounded the car and navigated past the planter, I saw a dark flash retreat as the lighting came up to full.  I wasn't quite sure what little critter was hiding in the door jamb but I had my suspicions.

Mrs Dog knew right off the bat, it was her old archenemy, the Gecko.

I pulled out my flashlight and focused the beam to the broadest setting.  That meant that instead of it being a pin spot, the equivalent of a 75 watt light bulb was spread broad so it wouldn't completely blind the creatures of the night.

Spotting the tail of the little pink lizard hanging over the top of the door, I knew that I would have to try to convince it to move or else there'd be another inhabitant of the living room today.

Stepping back to the garden, I found a leaf that had fallen from the screw palm and used it to tickle the Gecko.   It didn't work.   They're very shy creatures and they usually try to hide.  I've had them try to hide on my legs and head up into my shorts before so I do know what I'm talking about.

Thankfully they're more amusing than anything else.  No teeth so even if you do find a particularly cantankerous lizard, it's harmless.  I'm told little girls will get them to bite their earlobes sometimes to have Gecko Earrings, but I have never seen that first hand.

Without trying to harm this little pink creature, I knew that I would either have to be more aggressive with my Screw Palm Leaf Weapon, or just open the door and hope that when it's deciding to move, it's going to move out and not in.

At this point things began to happen quickly.

The dog had never lost sight of where the creature was.
She may be old, have dodgy kidneys, and a weak thyroid, but her eyes are perfect.

Hearing the bark was the first thing that told me that the Gecko had moved.

Feeling it hit my forearm first, I began to recoil slightly, being startled.

The Gecko didn't like that and bounced onto the door.

Now, the dog was jumping at the door as the little translucent creature was running away.   Right into the door jamb.  This time it was behind the hinges.   It's little pink brain furiously looking for an escape from the insistent dog and the curious human, it ran to the highest hinge.

I could have closed the door and been done with the predawn drama, but that would be needlessly cruel. Besides, these creatures give me an enormous amount of entertainment simply by their being around.

I bent down to unlatch the dog from her harness, and gestured for her to go indoors.   She did but that merely gave her a view of the gecko in the morning gloom.

Wielding the almost forgotten Screw Palm leaf, I tickled the gecko again.  It had the common sense to run away from the leaf and around the door to the outside.  Blocking the dog who was trying to get a purchase on the floor and looking like Wile E Coyote, Super Genius, I quickly shut the door.

Drama averted, nobody harmed except the dog who finally collided with the door with a soft thump.

Time for Coffee everyone, nothing to see here, lets move on! 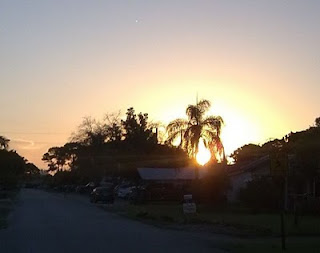 So, how did you start YOUR day?