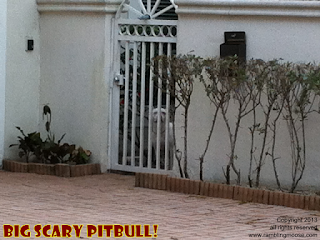 The barking starts about a block away.

Being a creature of habit, we walk the block clockwise.  There's a view of this gate from the corner, probably 6 houses down the street.  The dog isn't there every day, but every day he is, he barks.

You are probably afraid of him.  He's a pitbull.  Full white, big powerful dog, barking and showing his teeth.

You would be wrong.

The tail is wagging at you as you approach the gate.  The teeth are showing in a "Doggy Smile".

The dog barks more frantically.  The closer you get the more rapid fire he barks trying desperately to get your attention.

Standing at the foot of the driveway you say hello to the big scary pitbull and he responds.

He crouches down in the universal symbol of Let's Play! by being on the ground in the front, rear in the air, tail wagging, and springing up to greet you.  There's a playful yip! as he's being paid attention to.

No, the worst thing this dog would do is lick you as he'd bring what ever toy was laying around so you could play fetch.

I have been told that the big scary pitbull doesn't necessarily react like this to everyone but he is doing his job.  Being cute.

We actually look forward to seeing this dog greet us.   He's an ambassador for the breed, being given air in a small courtyard in front of the house.  He's also acting like he's bored out of his mind.  There isn't a dog around that wouldn't benefit from more walking around the block, including my own as I head on away from the big friendly guy.

Just like a light switch, he goes quiet once we're out of sight, waiting for the next familiar face.

All the while I keep hearing "It's not the breed, it's the owner" as we say good bye to our friend.