Never Do Two Things At Once While Baking - Picture 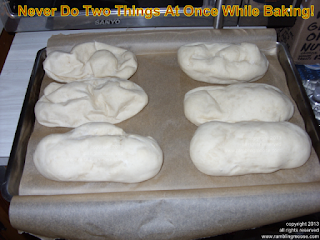 Really, when you are trying to do too many things, you end up deflating your sandwich rolls.

The last week I had house guests.   I found someone with the same name as mine.  First and last.  We corresponded for about a year and met when he was in town on vacation.   This last week he returned and spent a couple days bumming around South Florida.

When the dough was formed into rolls, I set the cookie sheet up high to let it rise.  You guessed it, the rolls were on top of the toaster.   Would have been fine had I actually turned the thing off.  It was baking at 325 without realizing it.  I probably killed the yeast by "prebaking" the rolls.

Oh well, three of them turned out fine.

So think of the little yeasty children!  When you bake, make sure you have plenty of clear counter space and don't have to go outside to check on the sprinklers!

As for my house guest - we figured we're related through our great grandfathers being brothers.  He's had a great time here in Paradise going around visiting all those touristy places.  I guess it takes finding a "lost to us" wing of the family to make a Local turn into a Snowbird for a week.  Sometimes, it's best to step out and remember why you moved to a city.   It will take a cousin from Nebraska to do it.

Now think about it.  If you have a rare name like my family does, you're related.  It's bound to be.  When you're watching them do a purchase, it's a bit strange to see "your name" on their credit card.  Never had that in my life.

Now I have a reason!   Some day I will!  We already planned confusing people in the small town he's lived most of his life by sending me into places introducing myself with my/our name and letting them tell me no.  "Of course I am!  See, the State of Florida says so!".  Seeing that it's a small town, word will get around quickly so we'd have to do those things the first day.   I don't see getting away with it the second day.