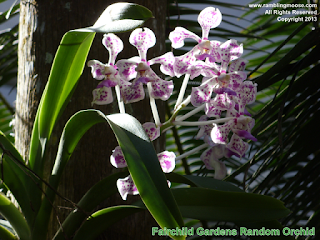 Funny topic for this one right?

I'm calling it that simply because I'm not an expert in orchids.  This being South Florida, you can tack a box to an old tree, drop some leaf litter or bark into it and a seedling of an orchid and it could be happy there.   Assuming it gets watered correctly and isn't attacked by Iguanas or some other critter, you can reasonably expect it to grow and bloom.

It isn't that Orchids are unremarkable, they just do quite well here with minimal care.

I think that attitude was evident at Fairchild.  There were many trees there, all with little signs saying what the Linnean name was, where they were from, and a common name if they had them.  At least one in a group would be labeled.  If you didn't have a sign, you had a helpful volunteer who usually knew.

On the other hand most of these trees had an orchid on or near them.  You got to expect them like they were part of the background flora.  But they were not really the reason for this garden, the trees were.  Great stands of rare tropical trees, some highly endangered, were given pride of place and labeled so everyone could know what they were.

Having visited botanical gardens before, they had a feeling of being a Tree Museum.  This one certainly was.  We were told that this stand of palms were Haitian Oil Palms, and that this was the only stand anywhere in the world and that efforts to bring back the species were being made.

After all extinction is forever.  Once gone, those trees won't be there to support the random orchids whether they're really random or not.

If we don't protect the trees, they'll go into a tree museum and paradise will get paved for that parking lot.