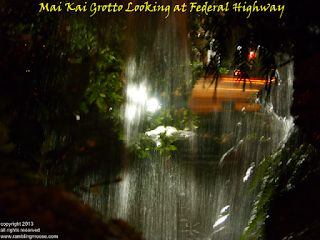 When the family comes in from out of town, get off your high horse and do some touristy things.

Here in Fort Lauderdale, there's a One Of A Kind gem of a restaurant called Mai Kai.  It's one of the last few large scale Polynesian themed restaurants in the nation.   They were all over the place in the years after the Second World War, but faded away.  Tastes changed, and it's labor intensive to do it right.

Mai Kai does it right.  Complete with stunning Polynesian dancers in grass skirts.   The food is simply put, amazing.   I have a speed bump on their menu since I always get their Pork Tenderloin - I just can't get past that pork!  I also have a rule that I will not order a meal in a fine restaurant that I can make at home as well as they can.   Their pork melts on my fork which is why I have it.

When Cousin Bill arrived from Nebraska, we were sitting around debating where to go for dinner that night.  We wanted to go somewhere that you just can't find anywhere else and absolutely no chain restaurants.   Mai Kai absolutely fit the bill.  Or the Bills since there were two of us.

The thing is that when you are in a restaurant that has tropical gardens that are strewn around water features, tiki torches, icons and statues, and a "Chinese Oven" that cooks your food in a wood fired chimney you will want to bring your camera.

When we go, we always sit outside.   The show is amazing, but the idea of being able to sit next to a waterfall and watch the skies go from blue to black over the palm trees is a rare show that you should not pass up.   It's also much more private since the gardens are not what the place is known for.

It is easy to get obnoxious with a camera.  To get the pictures "right" in low light you really do need a tripod.   On the other hand, since it's dim in there half of the challenge is seeing the scene and setting up the shot.  That makes the actual picture secondary.

After all, your dinner will be waiting once you get back to the table and that is why you came.   Try the pork tenderloin.  It's amazing too.