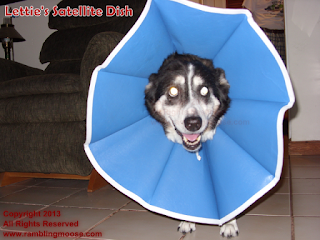 They warned us that it would eventually relapse.  It did finally happen.

When I took her in for a "Tune Up", they said that this time she may either not recover or the time to next relapse will be less than the 10 months we got this time around.

That's the summary I guess.

Saturday night we thought something was "off" but she's an old dog and we thought it was possible that it was just her being "her".

Sunday she refused almost all food and water so Monday we knew we needed to take her into the Vet for a checkup and rehydration.

This Renal Failure thing is a difficult thing to work with.  It makes a dog feel ill and nauseous. Not wanting to eat only compounds matters.

The vet did blood work and found that all her blood levels were elevated above where she was when she had her last episode.  She also has the beginning of Pancreatitis.

The course of action was three days of intravenous fluids, anti nausea medications called Cerenia, and more tests at the end of the week.

Since she's a very strong willed dog, that also means that she's on sedatives.   That smile you see on her face is there as a result.   When we got her home last night after "doggy day care" she lay on the cold tiles not moving unless helped to her feet.

So this weekend is a watch and see weekend.   She will decide if she makes it.   I've been offering so much food to her that she's getting wary of my approach.   She hasn't eaten any of it so it all just piles up.

Day two of the three day tank up is in progress.

These Canine Chronic Renal Failure articles get read by people who are going through the same thing that we are.  Your prognosis will be similar - basically the challenge is convincing the dog (or cat) that they want to eat.   Each time they get sick, they will refuse food and lose weight.  That sets up a cycle where the next time will be sooner and more severe until eventually you have to make The Decision as to whether keeping your pet alive is more cruel than kind.

And that, my readers, is where we are.